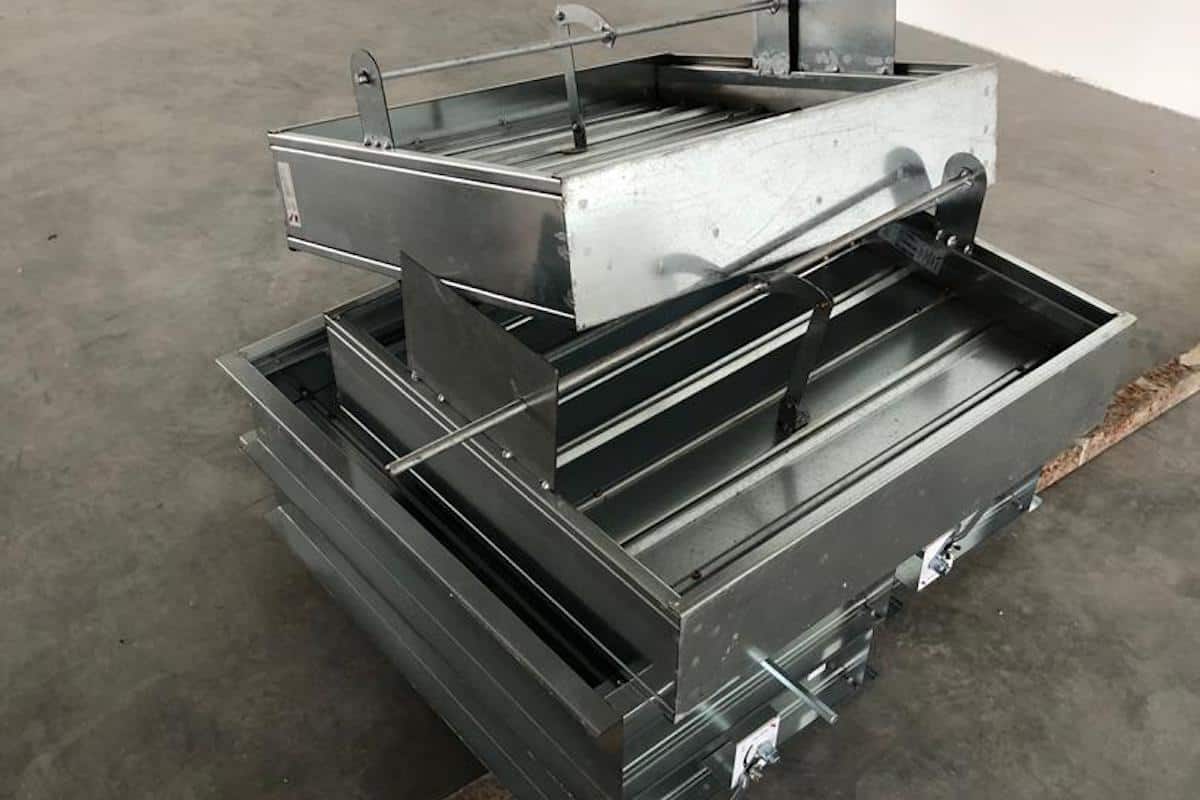 Dampers are one of the important elements in HVAC. They control airflow as well as prevent the spread of fire and smoke. There are many types of dampers in HVAC but, I’ll outline the 4 common ones.

The 4 common types of dampers in HVAC are:

So, what are these dampers and where they can be found? Without further ado, let’s take a deeper look into the 4 common types of HVAC dampers.

In HVAC, a motorized fire damper or MFD is a fire-resistance shut-off device that is usually paired with a fire-rated actuator to close completely within a short period of time to prevent fire from spreading from one room to another room.

Most MFDs are 2 hours fire-rated. They must be paired with fire-rated actuators which are the motor that spin automatically to close the damper in order to be a complete fire-resistance device.

MFDs are most commonly used in the lift lobby pressurization system. They need to function during a fire when the surrounding temperature is extremely high.

In the lift lobby pressurization system, MFDs are used to form the sandwich system which maintains the required pressure inside the lift lobby to prevent smoke from entering thereby hindering the rescue process.

Other than that, whenever there is a wall penetration, MFDs are most likely installed at the opening of the wall to seal it off during a fire to again, prevent fire and smoke from spreading from one room to another room.

However, smoke is more lethal than fire alone. So, most of us working in the HVAC industry often refer to motorized fire and smoke dampers simply as MFDs or motorized fire dampers.

The actuator of motorized fire dampers is usually powered and triggered by the control panel of the respective AHU or pressurization fan.

During a fire, the building’s fire protection system triggers a signal to the control panel thereby triggering the actuator to close the damper.

Most of the time, spring return on/off actuators are used for motorized fire dampers because they are mechanical type when closing and they close the damper very fast, usually within 15 seconds.

I always spend a lot of time comparing and deciding the MFDs’ configuration. The actuator of MFDs can be installed in several different configurations.

Motorized fire dampers can be made of either galvanized iron (GI) or stainless steel. However, most MFDs are made of galvanized steel at a thickness of around 1.2mm and tested in accordance with BS 476 part 20.

In HVAC, a fusible link fire damper is also known simply as a fire damper or FD. By default, it has a piece of metal holding the damper in an open position.

During a fire, the high surrounding temperature will cause the metal to melt and thus, closing the damper.

The fusible link usually breaks at a temperature around 74°C (165°F) and the damper closes via the force of the built-in spring when the fusible link breaks. In addition, the damper has a locking mechanism to prevent it from opening once closed.

Similar to motorized fire dampers, fusible link fire dampers are usually made of galvanized iron (GI) at a thickness of around 1.2mm.

In terms of fire and smoke control, both fusible link fire dampers and motorized fire dampers have many similarities. However, there are a few differences and they are as below:

During commissioning, it is less likely that contractors will perform tests for each and every fusible link because they need to replace the fusible link whenever they broke it for the tests.

On the other hand, contractors can test as many times as they want if they are using motorized fire dampers.

A volume control damper or VCD is a manually operated damper that allows the control of airflow in HVAC. It is usually installed in between ducts with a handle sticking out.

Homeowners and HVAC technicians can turn the handle which in turn rotates the blades inside the damper to regulate airflow.

While most VCDs are manually operated, they can be automatically controlled as well and they are called motorized volume control dampers or MVCDs. They use actuators to turn the damper via electrical signals just like MFDs.

However, MVCDs don’t require to be fire-rated. Hence, their actuators are not fire-rated and don’t close as fast as the actuator used for MFDs. Furthermore, most MVCDs use modulating actuators instead of on/off actuators.

VCDs are mostly made of galvanized iron (GI) at a thickness of around 0.7-1.0mm. Nonetheless, they can be made of stainless steel for better resistance to corrosion which is very useful for seaside HVAC systems.

For MVCDs that have actuators, their configuration is similar to motorized fire dampers. However, most MVCDs have their actuator located within the damper instead of outside the damper.

Volume control dampers are mostly installed in between ducts and they are more commonly found right after a duct branch. They serve as the main airflow controller for the branch.

The appearance of VCDs is almost identical to the MFDs except motorized smoke dampers have rubber lining for better sealing and lower air leakages. Nevertheless, VCDs or MVCDs almost always can’t be found at the opening of wall penetrations.

When fire and smoke is a concern, MFDs are used for airflow control. Otherwise, VCDs or MVCDs are used”

So, MVCDs are not used for the pressurization system. VCDs and MVCDs are used for air handling units, pre-cool AHUs and other air conditioning units.

A non-return damper or NRD only allows air to flow in one direction. In HVAC, non-return dampers are mostly found either before or after ventilation fans, especially for fans with a combined air plenum box.

A staircase pressurization system can have two fans; one duty one standby. Both fans are connected by an air plenum box which is a part of the pressurization fan duct connection.

If a non-return damper is not installed for each fan, smoke may travel back to the ductwork through the standby fan and get trapped when the duty fan is running, reducing the effectiveness of the system. With a non-return damper, smoke is only allowed to move in one direction which is towards the outside of the building.

Non-return dampers have the same function as check valves or one-way valves and they are very important in shared ducts and pipes systems.

When used for applications related to fire and smoke, non-return dampers should be fire-rated.

However, many engineers often miss out on the fire-rating specification of non-return dampers used for systems such as smoke extractions and staircase pressurizations.

Non-return dampers are usually made of galvanized iron (GI) at a thickness of around 0.5-0.8mm. If fire resistance is required, the GI thickness should be at least 1.2mm like fusible link and motorized fire dampers do.

Most people prefer to install NRDs by means of the slot-in method because it requires no additional joints and it is faster. However, the NRDs must fit properly inside the duct or else, they may bend and thus, not close properly.

Motorized fire dampers and fusible link fire dampers are very common in the smoke extraction and staircase and lift lobby pressurization system. Volume control dampers are essential in the ductwork of air conditioning units such as air handling units and fan coil units.

Non-return dampers are usually optional accessories where they improve the performance of the system. However, non-return dampers play a very important role in the smoke extraction and pressurization system.

Purchase and download the HVAC Basics (eBook) to learn more about HVAC components.