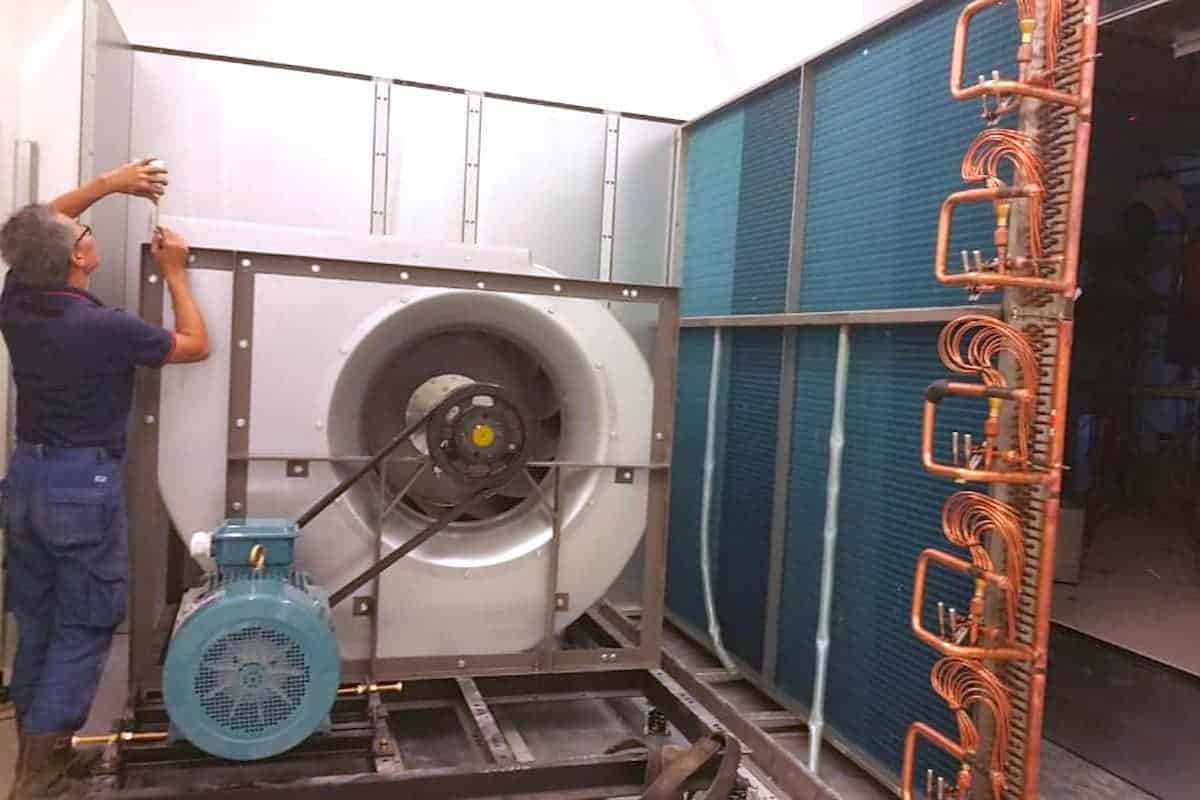 Air handling units (AHUs) are one of the key elements in HVAC. If you are working with medium to large-scale HVAC projects, you’ll be dealing a lot with AHUs. Since I’ve worked on AHUs before, I’ll share the basics of AHUs.

Generally, AHUs must have the 3 basic components which are the fan, cooling coil and filter. Other components can be added based on the needs and requirements. So, let’s look at some of the common components found in AHUs:

AHUs must have a fan to provide airflow. We called it a plug fan. For AHUs, the plug fan is usually a backward curve type. Forward curve plug fan is mostly found in FCUs rather than AHUs.

Nowadays, the fan motor of AHUs is required to be at least IE3 for efficiency. IE stands for international efficiency and most projects today are calling for IE3 or even IE4. Back in the old days, most projects are using IE2 motors. For more information about IE# motor, check out the difference between IE1, IE2, IE3 & IE4 by ElectGo.

Many projects required the AHU fan to be variable speed. Thus, you need to let the AHU supplier know about it if your project calls for a VSD AHU fan. Next, you’ll need to purchase a variable speed drive that matches the AHU fan in order to control the fan speed.

If AHUs are located near to people, they can be noisy and disturbing. Hence, some projects require the AHU fan section to have a sound attenuator which is basically sound insulation. For this requirement, you must inform the AHU supplier so that they’ll include it.

AHUs cooling coil can have many ways to construct. However, the cooling coil is usually fixed at 12 FPI (fin per inch), meaning the aluminium fins on the cooling coil must not be too close together because it’ll increase the pressure drop which in turn increases the plug fan power consumption.

Furthermore, most AHUs limit the airflow at 2.5 m/s or 500 fpm. Hence, the face velocity of the cooling coil must be limited to below 2.5 m/s. The reason is that if the airflow exceeds 2.5 m/s, the condensate water on the cooling coil may start to “fly out” and not drip onto the drain pan properly.

Most AHUs cooling coil is made of copper for the tubes and aluminium for the fins. However, you may use aluminium tubes to reduce the cost at the expense of quality and performance.

A filter is a must for AHUs to protect the cooling coil from dust and other particles that might damage it. Most AHUs have a basic pleated washable filter as their primary filter. The filtration grade of the primary filter is usually around G5 or MERV 6.

Nowadays, most AHUs have a secondary filter which is either an electronic air filter or bag filter that has a filtration grade of around F9 or MERV13. Such a filtration grade not just protects the AHUs but also provides cleaner air for the people.

If you’re dealing with hospital projects, some of the AHUs may require to have a HEPA filter which the filtration grade is around MERV 17, especially the AHUs for isolation rooms. Nevertheless, the secondary filter of AHUs in some projects is as low grade as F7, especially low-budget projects.

For a basic AHU, the fan, cooling coil and filter don’t have much room for cost savings. However, the fourth element of AHUs, which is the mixing box, gives a great opportunity for engineers to save cost.

To reduce air leakages, engineers design AHUs with a mixing box so that both the return air duct and the fresh air duct are properly connected to the AHUs. However, to save cost, engineers design the AHU room as the mixing box. If you are interested in plenum, check out my post on 4 types of plenum box explained.

Using the entire AHU room as the mixing plenum is an option to save cost. Apart from the AHU mixing box, a small length of return and fresh air ducts can be saved since the ducts only need to stop at the wall, not needing to connect to the AHU. Besides, the AHU room can be smaller.

However, the AHU will be sucking air from door gaps and other cracks, leading to high air leakages and higher power consumption. Furthermore, the AHU room will be noisier without the mixing box suppressing the noise transmission.

Many people misunderstood the function of UVC lamps in AHUs and most people don’t understand how UVC works. Therefore, I strongly suggest you check out my post on do UV lights in HVAC work after this.

If your AHUs are required to have UV lamps, you’ll need to discuss with your AHUs supplier so that they reserve sufficient space inside the AHUs for the UV lamps.

Heat pipes are used to further improve the dehumidification capability of AHUs. They work passively to provide heating to the cold air thereby allowing the cooling coil to be at a lower temperature so that more water vapor can condense.

To dehumidify more, the surface temperature of the AHUs cooling coil must be reduced. However, it will cause the supply air to be too cold and ultimately, overcooling the room. Thus, a heat pipe is installed to reheat the cold air so that the AHUs can maintain the desired room temperature.

Again, extra space must be allocated inside AHUs for heat pipes installation which the overall cost of the AHU itself will be increased.

Most AHUs casing is required to be constructed in accordance with EN 1886 standards. However, certain specifications are sometimes depending on the project requirement. Let’s take a look at a few commonly changeable specifications.

AHUs casing is mostly made of what we called PU panels. Usually, the panel thickness is 50mm as opposed to 25mm which is typically found in FCUs. With thicker panels, AHUs are better insulated and it has a significant impact in terms of energy efficiency.

Some projects even called for 75mm thick AHU panels. Furthermore, the density of the PU insulation is typically around 40 kg/m3. With PU insulations, AHUs casing is double skinned, meaning it is constructed with two metal sheets with PU insulations in between.

Small AHUs may opt for a single skin casing with PE foam insulations. With such a setup, these AHUs are cheaper and more feasible for low-budget projects.

The base of the AHUs is usually made of C-channel steel. Typically, the base height is about 100mm. If you reduce the base height, you can save cost, especially when the site already has concrete plinths for your AHUs. Besides, if your AHUs are too tall, you may want to consider lowering them down 50mm by reducing the base height.

Most AHUs drain pan is made of SUS304 (stainless steel 304). High specification projects may require you to have a SUS316 drain pan, especially when the project is located near the sea. However, you may use a galvanized steel drain pan for low-cost projects.

To most people, AHUs are part of the air-side equipment of the chilled water system. Some people know that AHUs can also be found in DX split unit systems. However, only a few people are aware that the VRF system can actually pair with AHUs.

One AHU can connect up to 5 VRF outdoor units, making the cooling capacity of a single AHU close to 1 million BTU or nearly 80 RT. There will be 10 large refrigerant copper tubes (liquid & gas) running from the AHU all the way to the VRF outdoor units which are nearly 200 meters away from the AHU.

The physical dimension of the VRF AHU is about 3.3 meters by 3 meters by 2.65 meters with only the basic components included (fan, cooling coil, primary filter and secondary filter only).

VRF AHUs are incredibly huge. In one of my previous projects, I dealt with 3 VRF AHUs. Together, I have 15 VRF outdoor units and 30 refrigerant copper tubes to handle. I can tell you, refrigerant leakage is the worst nightmare with this kind of air conditioning system.

AHUs are made of the 3 basic components which are the fan, cooling and filter. In addition, AHUs can have a mixing box, UV light, heat pipe and heat wheel depending on the requirement.

Other than the chilled water system and DX split, the VRF system can also couple with AHUs. If you want to know more about the VRF system, check out my post on VRF working principle for air-cooled & water-cooled.