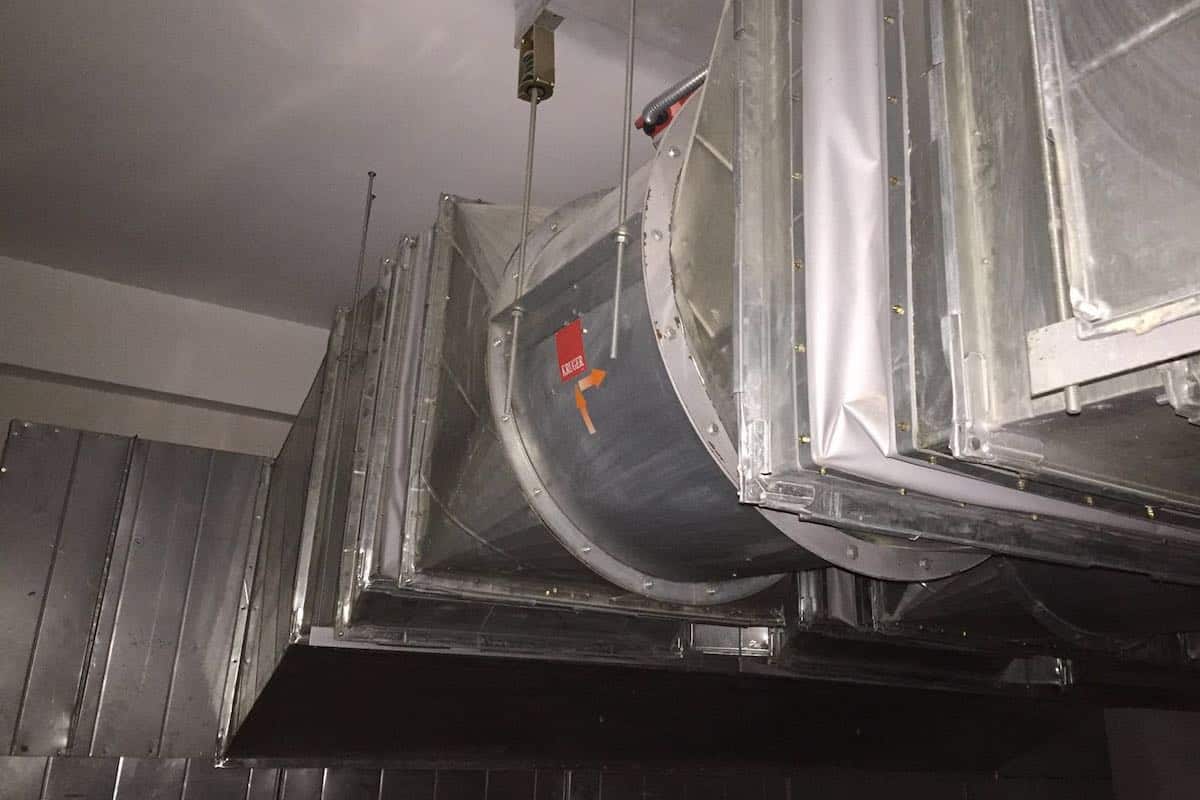 A pressurization fan duct connection starts with a weatherproof external louvre that comes with an insect screen. Then, a plenum box is connected right behind the louvre. Next, a duct reducer connects the plenum box with a fire-rated canvas before it is connected to another duct reducer.

The external louvre installed on the exterior wall of the building must be weatherproof. Weatherproof louvres have narrowly arranged blades and the blade's profile is designed to prevent rainwater from entering or splashing in.

Typically, weather louvres have an approximately 50% free area despite having such narrowly arranged blades. However, if the required louvre dimension is too large, it is advisable to use multiple louvres instead of one louvre to prevent the louvre blades from bending due to strong suction.

Duct reducers are used to connect two components of different sizes. As mentioned earlier, we want to reduce the air suction force and the noise at the louvre. So, the louvre and the plenum box are larger than the duct and the fan connection and thus, we use duct reducers to connect them.

Duct reducers collectively create significant pressure drops. Hence, they have a lighter slope to minimize pressure drop. However, we can't have long duct reducers as they take up valuable spaces. Thus, we need to optimize the duct reducers size based on site conditions and refer to SMACNA duct construction standards for guidance.

When constructing duct reducers, we always put the slope at the bottom rather than at the top. This is because we want to have as much headroom as possible inside the fan room.

Pressurization fans bounce a lot during the initial startup. Hence, we need to provide a canvas on both sides of the fan connections to let the fan bounce around and not putting stress on duct joints.

The canvas must be made of fire-rated materials which are normally grey in color while non-fire-rated one is dark green in color. The canvas must have sufficient width so that when the fan bounces, both ends of the canvas will not contact each other which can tear the canvas after a period of time.

In addition, we must pay extra attention to the integrity of the fire-rated canvas because the canvas sometimes has a few loosen screws which will cause air leakages and reduce the performance of the pressurization system.

The motor of pressurization fans must be fire-rated as well. In Malaysia, we commonly use the class H motor. Many times, it is coupled with a vane axial type of fan.

Most of the time, pressurization fans are hanged from the soffit slab. Vibration isolators must be installed at all mounting points to absorb the vibration caused by the rotating fan blades.

Because the pressurization fan is huge, it has a great amount of inertia. Thus, we must not allow a full-power startup as it put a lot of pressure on the fan blades which may cause them to shatter.

Instead, power is given to the fan in a step-by-step manner. Usually, we use an auto-trans (auto-transformer) starter to break the power into two stages. Initially, the fan starts to rotate slowly at a fraction of the power. After a few seconds, the auto-trans switches and provides full power for the fan to rotate at full speed.

For smaller fans, a star-delta starter is very common while a DOL (direct-online) starter is for even smaller fans like mechanical room ventilation fans.

Auto-trans and star-delta starters also reduce the starting current which greatly helps on the electrical side.

Services such as cable trunking and fire pipes should not run near the pressurization fan because as mentioned earlier, the fan will bounce around during startup and may damage those services.

If you have the main fan and a backup fan, a non-return damper is required for each fan to prevent the air generated by the main fan from going into the backup fan and to the outside.

Non-return dampers only allow a one-direction flow of air. Not only does it prevent birds from entering the building through the ductwork, but it also guides the airflow in the right direction.

The airflow is the strongest right after the fan connection. Thus, we should use elbow ducts instead of the square plenum to prevent the air from bouncing back, causing huge pressure drops which may fail the pressurization system.

For pressurization ducts, the duct joints mostly are using the TDC joint. Only small ducts are suitable using the slip-drive joint. However, the TDC joints are prone to air leakages. So, you may need to use sealant to fix the leakages.

Weatherproof louvres have narrowly arranged blades and the blade's profile is designed to prevent rainwater from entering or splashing in. A plenum box is attached right behind the external louvre to prevent strong suction that can bend the louvre blades and reduce the noise at the louvre.

Duct reducers are used to connect two components of different sizes. Since they create significant pressure drop, we need to optimize the duct reducers size based on site conditions and refer to SMACNA duct construction standards for guidance.

Besides, we need to provide a fire-rated canvas on both sides of the fan connections to let the fan bounce around and not putting stress on duct joints.

The motor of pressurization fans must be fire-rated. Vibration isolators must be installed at all mounting points to absorb the vibration caused by the rotating fan blades. Use auto-trans or star-delta starter to reduce the starting current.

If you have the main fan and a backup fan, a non-return damper is required for each fan to prevent the air generated by the main fan from going into the backup fan and to the outside.