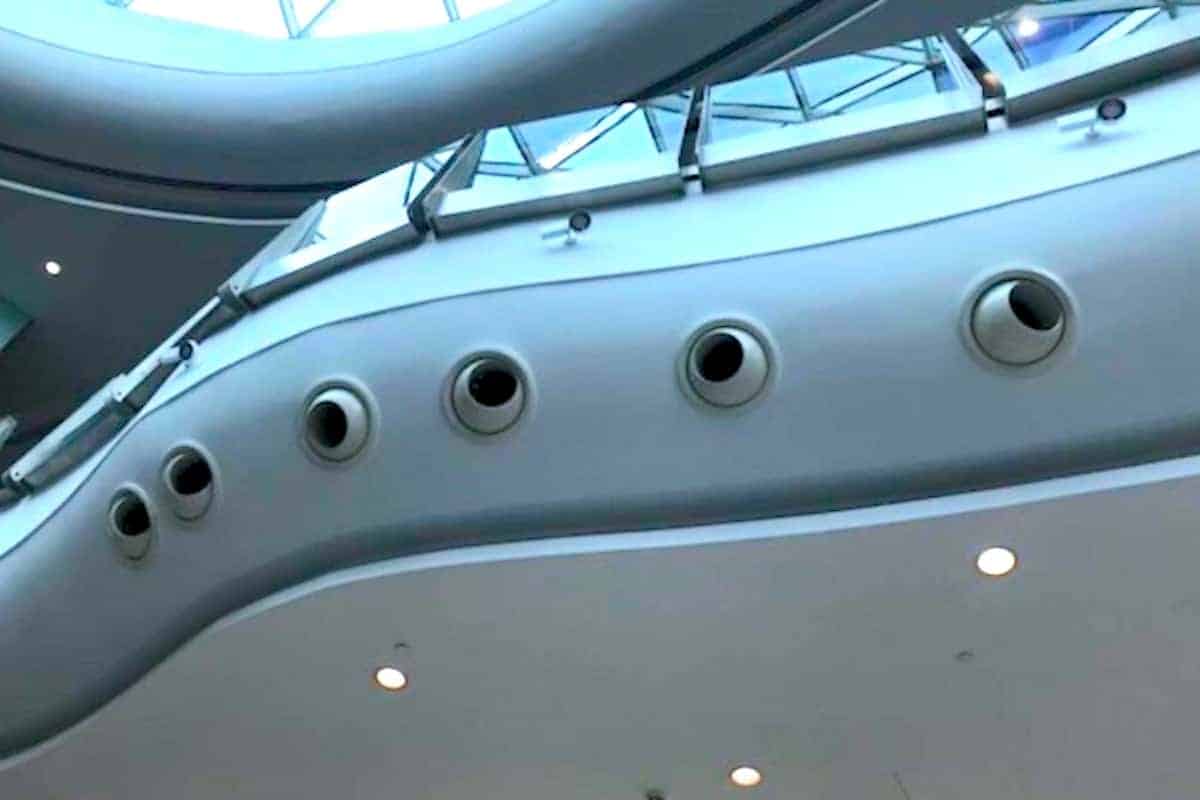 The 6 common types of diffusers in HVAC are:

Before we start, what are HVAC diffusers? HVAC diffusers are used to deliver cold air or hot air, depending on whether it is for cooling or heating. The main difference between diffusers and grilles is that diffusers are often associated with airflow control while grilles are mostly not.

So, when we refer to something as a diffuser, it means that we’re talking about supply airflow. Similarly, most people refer to grilles when they are discussing return airflow.

However, that’s not always the case. Some of the common names given to airflow distribution materials are diffusers, grilles, vents, registers and louvres. I don’t think it’s really that important about the naming but they do make us understand the subject quicker.

The size of directional diffusers are mostly 2×2 ft (width x length) and they fit perfectly on a 2×2 ft ceiling. However, they do come in 1×1 ft and other sizes upon request.

“Beware when you purchase directional diffusers because you need to specify whether the ceiling is measure in Imperial unit or SI unit.”

Standard directional diffusers are made of aluminium. But, if you want a cheaper option, you can ask the supplier to change the material to galvanized steel.

Galvanized steel directional diffusers are quite common but they are more likely to rust and I’ve seen many of them rusted. Besides, they are heavier to carry.

Directional diffusers can be found almost everywhere, especially in office buildings and shopping malls. Particularly, the 2×2 ft 4-way diffuser is the most common type of HVAC diffuser.

Directional diffusers can be installed on plaster ceilings too. However, they are not aesthetically appealing to most people. Hence, you hardly see them in hotels and luxury homes.

Directional diffusers offer excellent airflow distribution. Each of them supplies about 300 cfm of airflow at low noise, barely audible. They are mostly coupled with a radial damper, a crown damper or an opposed-blade damper for airflow control.

Furthermore, most of them come with a round-to-square adaptor (or plenum box) for a flexible duct connection.

If you have a directional diffuser that has a radial damper, you can use a screwdriver to adjust the damper and thus, the airflow without having to open up the diffuser at all. It’s especially convenient when we’re talking about hundreds of diffusers in a building.

However, the radial damper may be loose after some time since it is only secured by a bolt and a nut. Hence, some people prefer to use a crown damper on their directional diffusers. But, the crown damper is harder to adjust from outside the diffuser.

Linear slot diffusers always have two lengths; 600mm and 1200mm. Other lengths such as 1500mm are possible depending on the manufacturer. As for the width, it’s depending on the number of slots.

Needless to say, the more slot it has, the wider it gets. To give you an idea, a 2-slot and a 3-slot linear diffuser is about 100mm and 150mm in width respectively.

Linear slot diffusers look more premium than other types of supply air diffusers. Therefore, they are very common in hotels and luxury homes.

The number of slots in linear diffusers corresponds to the amount of airflow. The higher the airflow requirement, the more slots it needs to have. Hence, commercial buildings often use 3-slot and above.

Some luxury places even have curved linear slot diffusers. They are placed side-by-side to form a continuous length of the diffuser which makes them look even better.

In such cases, some linear slot diffusers are dummies and are not connected to any supply or return air duct. Just for aesthetic purposes.

Linear slot diffusers required a rectangular-shaped plenum box with an opposed-blade damper for airflow control. The plenum box has a round duct collar for a flexible duct connection.

It’s very important that the duct collar on the plenum box of linear slot diffusers is put on the side of the plenum box rather than on the top. I’ve covered the reason in my post about the 4 types of HVAC plenum boxes.

Besides, its vertical throw characteristic may cause uncomfortable if too much air is blasting onto people’s heads.

However, when noise is not a concern, linear slot diffusers are good for high ceiling rooms. They are capable of throwing air from the ceiling to the ground at a height of around 9-12 meters most of the time. If you allow more air to pass, you can even throw up to 30 meters vertically.

If you have ceilings with a height of 12 meters, you can control the supply airflow based on the diffuser datasheet to cap the air throw at around 9 meters so that you don’t blast cold air on people’s head but you allow the air to travel close enough to the ground and let it sink naturally. Thus, you don’t waste energy.

The diameter of round diffusers is available from 150mm up to 600mm or more depending on the manufacturer. However, most round diffusers are 250mm and 300mm in diameter since these sizes are appropriate for about 250-300 cfm of airflow.

Furthermore, supply air flexible ducts are mostly 250mm and 300mm as well. Hence, they fit very well to round diffusers.

Round diffusers can be seen in homes, office buildings, hotels and factories. They are often installed on plaster ceilings. When used in factories and other places where aesthetics is not a concern, most of them are naked or installed without the ceiling.

Similarly, round diffusers are often coupled with a radial damper or a crown damper but not an opposed-blade damper. Many round diffusers have an openable front cover for easy damper airflow adjustment. They may not need an adaptor for the flexible duct connection since they already have a round collar.

Swirl diffusers have angled blades to “swirl” the supply air. They can be either round or square in shape.

On the other hand, swirl diffusers are the combination of both the directional and linear slot diffusers. They throw air horizontally and vertically, and the amount of airflow in each direction can be adjusted by setting their blades.

Although swirl diffusers have vertical air throw, they are not capable of throwing the air as far as linear slot diffusers. Most of the time, they throw air maxed at about 4-5 meters only.

By default, swirl diffusers are white in color. Other colors are possible upon request depending on the manufacturer. Their blades have different arrangements for different airflow patterns.

Swirl diffusers can be installed at places just like directional diffusers and round diffusers. However, swirl diffusers are less likely to be seen in low-end office buildings and hotels due to the higher cost.

Because swirl diffusers are available in both round and square shapes, they can be installed on 2×2 ft ceilings, plaster ceilings or even without the ceiling.

Double deflection diffusers are like a mesh; many square-shaped holes. They can be viewed as cheaper linear slot diffusers but handle larger airflow.

By default, double deflection diffusers are white in color and square-shaped. Similar to any square-shaped diffusers, we must be specific about whether to use the SI unit or the Imperial unit.

Double deflection diffusers are mostly used in school halls, low-end theatres and auditoriums where there are high ceilings and aesthetics is not a major concern.

Double deflection diffusers are excellent vertical air throwers. They can handle a high airflow supply yet remain quiet. However, they are not able to throw air as far as linear slot diffusers since the air is not concentrated.

Nevertheless, double deflection diffusers are still suitable for most high ceilings where the ceiling height is about 9-12 meters.

Since double deflection diffusers are square-shaped, they need a round-to-square adaptor if connected to a flexible duct. Also, they can be coupled with a radial damper, a crown damper and an opposed-blade damper for airflow control.

Jet diffusers are round-shaped supply air diffusers that look clean and smooth. Most of them only have one big opening for air to pass through unlike any other diffusers that have many openings.

Jet diffusers are made of aluminium. They are like a ball in a round cover which allows them to rotate around and thus, supply air to almost any direction.

Jet diffusers also have standardized sizes from 100mm up to 600mm or any other sizes upon request depending on the manufacturer.

The outer appearance of jet diffusers is very clean and smooth. Thus, they are suitable for high-end places such as airports, auditoriums, cinemas and museums. Nevertheless, they are mostly seen in airports, mounted on sidewalls along the hallway.

Because jet diffusers have a large opening, they deliver air at high velocity and yet, very quietly. Furthermore, jet diffusers have very little air resistance which is gentle on the requirement of the static pressure of air conditioners.

Jet diffusers can throw air up to 20 meters. Again, it’s uncomfortable if we allow too much air to blast at one location.

Nevertheless, the above 6 diffusers are the most common types of supply air diffusers used in air conditioning. Ventilation systems mostly use grilles with a volume control damper instead of diffusers.

Diffusers are designed for certain airflow patterns which are needed to distribute cold/hot air evenly or as intended. Each type of diffuser has its own purpose and we should always use the suitable one according to the needs.