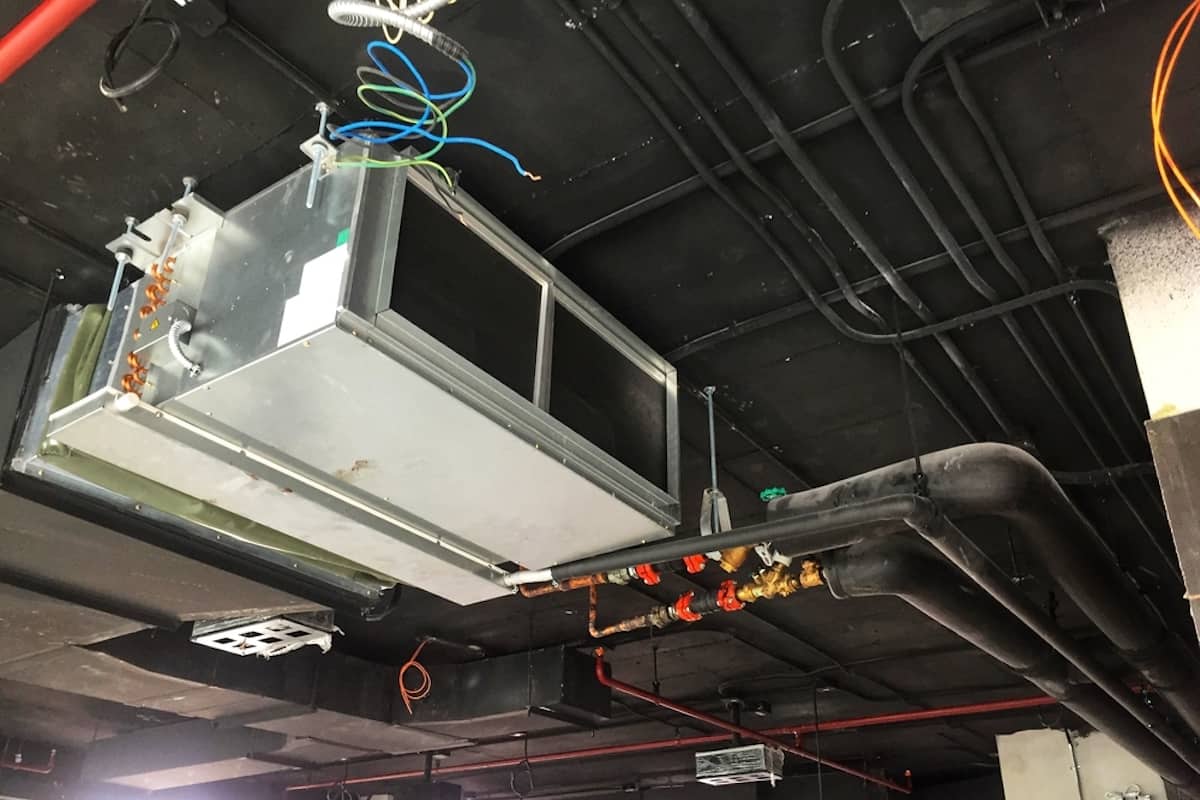 What is the Purpose of a Plenum Box?

Plenum Box at the Back of FCUs and AHUs

The main purpose of having a plenum box installed at the back of a fan coil unit (FCU) or an air handling unit (AHU) is to reduce the velocity of the return air such that the face velocity of the cooling coil does not exceed 2.5 m/s.

Face velocity is the off coil air velocity. It is the velocity of the air right after the cooling coil of a fan coil unit (FCU) or an air handling unit (AHU).

In other words, if the air velocity is more than 2.5 m/s, it is considered too strong and the condensate water on the surface of the cooling coil will “fly out” and not drip on the drain pan properly.

Usually, ducts are sized based on friction loss. Engineers fix the friction loss at 0.1 in.WG per 100 ft to calculate the required duct size at a given airflow rate regardless of the air velocity.

However, when it comes to the cooling coil, air velocity must be controlled and thus, a much larger duct called a plenum box is used to increase the internal volume thereby reducing the air velocity.

Let's take an example to understand it better:

As you can see, the purpose of a plenum box is clear. It is not practical to use large ducts for supply and return air to maintain the air velocity at below 2.5 m/s all the time because of limited space. Hence, we install a plenum box to achieve that at the final moment.

In addition, the plenum box acts as a mixing box to blend the warm fresh air with the cold return air if the fan coil unit (FCU) or air handling unit (AHU) indeed has a fresh air intake.

The purpose of having a plenum box at the back of a supply air diffuser or a return air grille is to reduce the velocity of the supply air or return air such that the noise generated is controlled within an acceptable range.

Again, let's take an example to understand it better:

Neck velocity is the velocity of the air right before the diffuser.

Besides, the plenum box is often equipped with an air volume control damper (VCD) so that we can adjust the amount of airflow at each diffuser or grille.

How to Size a Plenum Box?

As you might have guessed already, a plenum box is sized according to the air velocity requirement. You can size a plenum box just like how you would size a duct. See my post How to Calculate Duct Size? (Best Duct Size) if you're not sure how to do it.

Many times, the plenum box size is already specified or standardized by the manufacturers of FCUs, AHUs, diffusers, grilles and louvres. Hence, you don't have to worry about it.

When You Need to Use a Plenum Box?

For diffusers, grilles and louvres, you are most likely have no choice but to use a plenum box because otherwise, you can't connect the duct.

On a side note, plenum boxes also serve as an adaptor for square-to-round duct connection with duct collars.

The question comes when you have a fan coil unit (FCU) or an air handling unit (AHU).

Generally, if you have a large capacity FCU that requires its return air to be ducted, you'll need to use a plenum box. Otherwise, you can use the space above the ceiling as a plenum. Such a method is called free return as opposed to ducted return.

Basically, you install return air grilles on the ceiling without connecting them to any duct. The FCU will pull the air through the return grilles freely. However, such a method usually causes an imbalance of return airflow in each grille.

In addition, if you are concerned that the FCU might generate a loud noise or you have a very strict noise level requirement, you may consider using ducted return and thus, a plenum box which you can internally insulate the plenum box to suppress the noise transmission.

Learn more about internal insulation in ducts from my post 4 Types of Duct Insulations (with Specifications).

For AHUs, if you don't have sufficient space or the AHU room is not big enough, you can consider omitting the return air plenum box and using the entire room as a plenum. Such a method is also called free return.

However, to suppress the noise transmission, you must insulate the AHU return air duct internally.

Still, be careful with the return air duct size because if it is too small, you may choke the AHU as well as create a strong negative pressure within the AHU room which may cause the door difficult to open and bring in air from unwanted compartments at the same time, causing a performance drop in the AHU.

To learn more about the different types of plenum in HVAC, see my post 4 Types of HVAC Plenums (Basics & Applications).

link to Can VRF Provide Heating? (How It Works)

VRF is relatively new to many people. It is an energy-efficient air conditioning system that can cool a whole house. But, people are concerned if VRF can provide heating. So, I did some...

Ductwork is one of the core elements of HVAC. Ducts can be made of different metals and different applications require different types of metal. So, what are the types of metals used for...