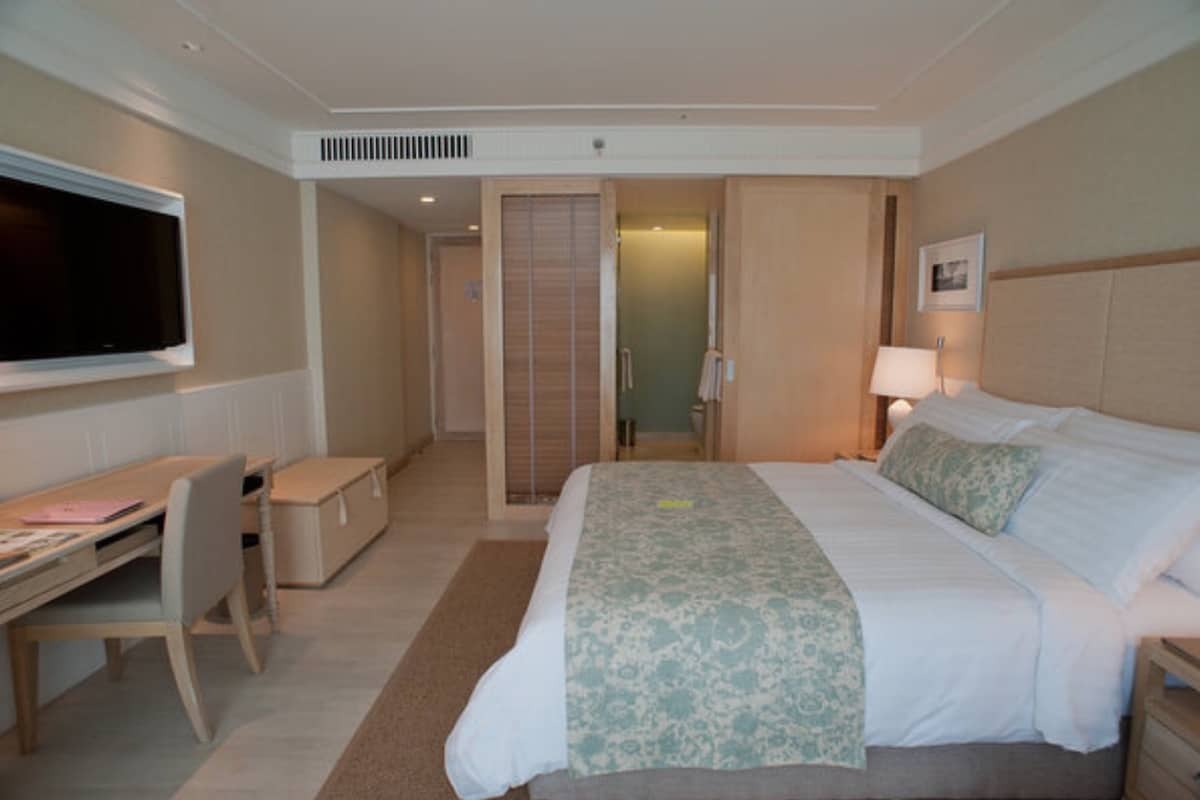 How Does Air Conditioning Work in Hotel?

Budget hotels (1-star to 2-star) usually don’t have many hotel rooms. Hence, they mostly use split air conditioners. Big luxury hotels (4-star to 5-star) often have a lot of hotel rooms and thus, they always use a chilled water fan coil unit in their hotel rooms.

The air conditioning in a hotel room starts with the hotel key card system. After you get inside your hotel room, you need to insert your hotel card into a dedicated card slot in order to provide power to the appliances in the hotel room.

Right next to the hotel air conditioner, there is a valve that controls the chilled water supply into the cooling coil of the air conditioner. The other end of the valve is controlled by the thermostat (display controller).

Once the hotel room temperature matches with the set temperature, the valve will close to stop the chilled water from flowing through the air conditioner and therefore, the cooling stops.

Air conditioners that are concealed above the hotel room ceiling use a short piece of duct and a supply air diffuser to distribute cold air. At the same time, they have a return air grille and a mixing plenum box to circulate back the air.

Usually, these public hotel air conditioners run by schedules programmed by the hotel. Besides, they can be remotely controlled from the hotel control room.

Do Hotel Air Conditioners Pull Air from Outside?

A hotel typically has hundreds of hotel rooms and air conditioners. However, we often don’t see many louvers or grilles on the exterior wall of the hotel. Hence, do hotel air conditioners pull air from outside?

Hotel fresh air fans can be located on the roof or on dedicated mechanical floors. They draw in outside air and supply it to their respective hotel air conditioners via ductwork.

The amount of fresh air introduced in each hotel room is controlled by an air volume control damper (VCD). Usually, the percentage of fresh air relative to the supply airflow is about 10%.

What Kind of Air Conditioners Do Hotels Use?

Why Does a Hotel Room Typically Use Fan Coil Unit?

Furthermore, aesthetics are very important in hotels. Hence, most hotel air conditioners are concealed above the ceiling. Only aesthetically-appealing diffusers and grilles are exposed under the ceiling.

However, other areas of the hotel such as administrative offices, maintenance offices and control rooms may not need to have decorations. So, these areas may be fitted with conventional wall-mounted split air conditioners.

In addition, fan coil units usually don’t have any sort of built-in program and control. Hence, their controls can be customized to the hotel needs. Many fan coil units are integrated with the hotel smart control system.