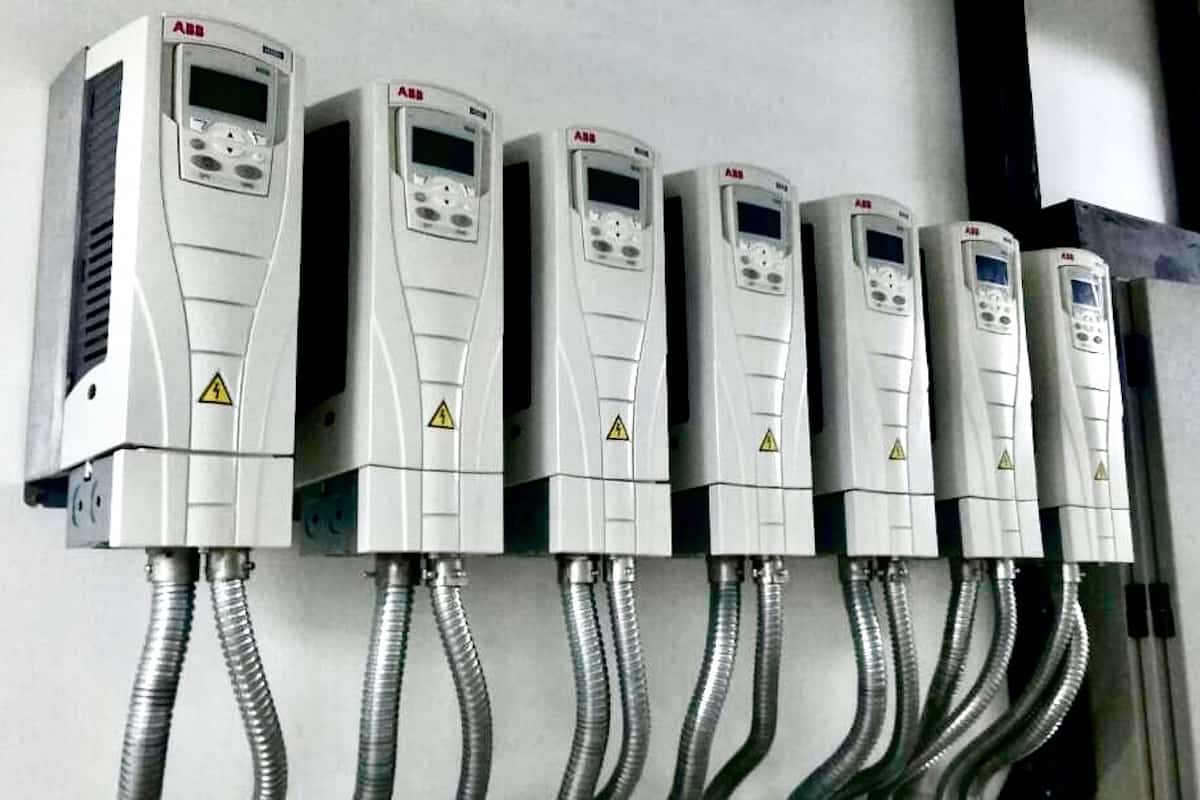 VFDs are very common in HVAC, especially new HVAC systems. They are devices that can improve the energy efficiency of various HVAC systems. So, how VFDs work in HVAC?

First of all, what is a VFD? VFD stands for variable frequency drive. VFD is also known as VSD or variable speed drive. A VFD or VSD is a device that can change the electrical frequency (Hz) of the power supply.

The power supply of HVAC units such as compressors, pumps and fans can be connected to a VFD for variable speed control. The speed of these HVAC units is directly proportional to the electrical frequency (Hz) of the VFD. So, increasing the Hz will increase the speed and vice versa.

Nowadays, more and more HVAC systems are using VFDs. In the future, there will be even more HVAC systems that use VFDs to improve their energy efficiency. Hence, it is very important to understand the basics and applications of VFDs.

How VFDs Work in HVAC?

VFDs work by changing the electrical frequency of the power supply thereby changing the motor speed. There are 6 applications of VFDs in HVAC as follow:

VFDs have different purposes when paired with different HVAC units. Besides, they are controlled differently in different applications. So, let's see how a VFD works in each application.

A VFD can be used to regulate the electrical frequency (Hz) of the power supplied to a chiller so that the compressor speed and condenser fan speed (air-cooled chillers only) can be controlled.

Now, with a VFD, water-cooled chillers can operate at any percentage of capacity from 0% to 100%, subject to the minimum load requirement.

This allows engineers to better tune the chillers to always operate at the most optimum capacity.

On the other hand, air-cooled screw chillers are often integrated with a VFD as well. For air-cooled chillers, a VFD can be used to control the speed of either the compressor or the condenser fan or both.

The first advantage of a VFD chiller versus a non-VFD chiller is better part-load efficiency. Secondly, VFD chillers can control and reduce the starting inrush current which benefits buildings' electrical distribution systems.

VFDs are known to cause non-linear loads, resulting in the generation of current and voltage harmonics which can harm other electrical components such as transformers and switchgears.

However, it is extremely rare that VFD chillers cause an issue with harmonics, especially when there are practices that can help reduce VFDs generated current and voltage harmonics.

Chilled water pumps and condenser water pumps can be either a fixed-speed type or a variable-speed type. Variable speed pumps are also known as VFD pumps.

A VFD can be used to regulate the electrical frequency (Hz) of the power supplied to a pump so that the rotational speed (RPM) of the pump can be controlled.

However, if the secondary pumps are a fixed-speed type, there will be times where the chilled water flow rate is either too much or too less, not matching the cooling demand and wasting energy.

If the secondary pumps have a VFD onboard, the chilled water flow rate can always match the cooling demand. Hence, energy consumption can be optimized.

In addition, using a VFD on pumps provide a safety margin on pump design and selection. If a VFD pump is oversized, it can simply reduce the Hz thereby reducing the flow rate to match the actual requirement while an oversized fixed-speed pump spells disaster.

VFD pumps are often associated with VFD chillers. Together, they provide a significant improvement in the overall energy efficiency of the chilled water system.

Staircase and lift lobby pressurization fans can use a VFD to control the pressure within staircases and lift lobbies precisely.

A VFD can be used to regulate the electrical frequency (Hz) of the power supplied to pressurization fans so that the amount of air pressure exerted on staircases and lift lobbies during a fire can be controlled.

Traditionally, pressurization fans use a pressure relief damper to control the pressure within staircases and lift lobbies. A differential pressure switch is used to provide the feedback signals for the control.

Hence, the design and selection of pressurization fans are extremely crucial without variable speed because if the staircases and lift lobbies are over-pressurized, women and elders will not be able to open the escape doors. Otherwise, fire smoke will enter and hinder the escape process.

Furthermore, VFD fans allow a more flexible design and selection. However, in order to enable fans to speed up when necessary, they must be sized slightly bigger.

VFD fans also have a limit to how slow they can spin. Generally, a 50 Hz fan can go down to a minimum of 30 Hz and go up to a maximum of 60 Hz (not for a prolonged period of time).

Cooling towers can use a VFD to regulate the speed of their fan to save energy.

Conventional cooling towers only have a single-speed fan or a multi-speed fan. Still, they have blind spots where the opportunity for energy savings cannot be fully realized.

Nonetheless, being able to control the speed of cooling tower fans can help in the energy optimization of the chilled water system.

A VFD can be used to regulate the electrical frequency (Hz) of the power supplied to air handling units (AHUs) so that the speed of the AHU fan can be controlled.

Usually, a VFD is implemented in AHUs rather than FCUs (fan coil units) because the benefits are greater due to the higher airflow and capacity.

VFD AHUs control their speed by means of a feedback signal from the differential pressure sensor within the duct connecting to the AHU.

If the pressure drops, it means the cooling demand is higher and thus, the VFD will ramp up to increase the airflow of the AHU.

VFD AHUs are often associated with a VAV system. Without the need for individual thermal zone controls, there is no point in installing a VFD on an AHU.

VRF is not the same as VFD. VRF stands for variable refrigerant flow. VRF is an air conditioning technology, unlike a VFD which is a standalone device.

Unlike commercial HVAC units like chillers, pumps and fans, inverter air conditioners don't have a separate variable speed drive. Instead, they have an inverter drive that is built within the outdoor unit.

With an inverter drive, the compressor of residential air conditioners can slow down or speed up based on the cooling demand.

Benefits of VFDs in HVAC

As a summary, below are some of the benefits of VFDs in HVAC:

Although VFDs are more expensive now, they will become a basic requirement in HVAC in the near future as the world moves towards a greener and more sustainable environment.

link to What is Economizer in Chiller?

Large chillers often have an economizer to improve energy efficiency. However, engineers often don't quite understand what is economizer in chiller. So, I did some studies. Chiller economizer...

Continue Reading
link to How to Cover Air Conditioner Pipes?

Stay updated and receive email notifications whenever there is a new article published on aircondlounge.

If you have doubt about your HVAC system, I do provide email consultation services.