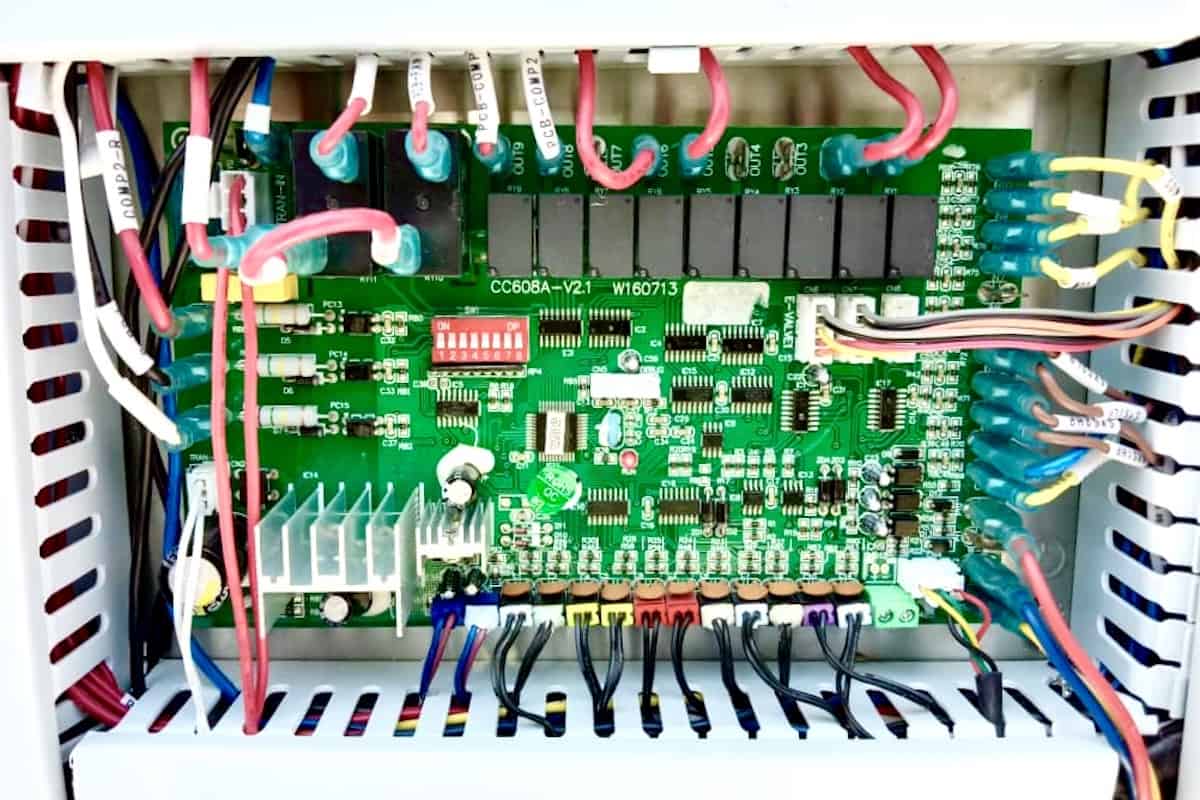 HVAC equipment such as air conditioners, ventilation fans, chillers, cooling towers and pumps need to receive signals in order to run, stop, regulate and trip. Without signals, these machines don't know what to do.

The signals to HVAC equipment are triggered by devices such as temperature sensors, starters and relays, and they are transmitted through communication cables such as CAT5 cables and PVC cables.

Many people explain HVAC controls in a way that is extremely difficult for HVAC engineers to understand. All the programming languages, protocols and computer terms used in their explanation are not really used and practiced by HVAC engineers most of the time.

So, I'll explain HVAC controls with common terms that you'll find used by the people working in the HVAC industry. Let's get started.

We can view HVAC controls as three parts; a) operation control, b) temperature control and c) air quality control. I don't think anyone had broken down HVAC controls as I do but I find it is better for people to understand.

Operation control involved the start and stop of HVAC equipment such as air conditioners and ventilation fans. Besides, it also includes variable speed control. In other words, it tells the equipment to run, stop or run at what percentage of speed.

Now, let's take a few common HVAC equipment and dive deeper into their control system starting with the equipment itself all the way to the triggering point.

Thus, a thermostat is needed to control the operation of the ventilation fan.

But, where does the electrical circuit comes from?

In short, every piece of HVAC equipment has a trigger point. They are always in standby mode, waiting for a device to trigger and give a signal for them to operate in different manners.

The above example can be considered as the most basic form of HVAC control. Now, let's take a look at a more complicated control system.

Variable air volume or VAV box is an airflow device that controls and distributes air based on room temperature. VAV boxes are usually found in HVAC systems that involved air handling units (AHUs).

In order for a VAV box to know how much air can be allowed to pass through, it must be able to measure the airflow first. So, a mini pitot tube is commonly found in VAV boxes to measure airflow.

Next, the VAV box must know the relationship between airflow and temperature. In other words, it must know how the amount of supply air affects the room temperature. Hence, an algorithm or program must be written by people and built within the VAV box.

However, all HVAC control devices must be calibrated in order to deliver precise results. For instance, if the same thermostat is inaccurate, it may give a 10V signal when the room temperature is only increased by 1ºC. Thus, the VAV box will supply 500 cfm of airflow to the room which may cause overcooling problems.

So, appropriate and regular calibration of control devices is extremely important in HVAC controls. Otherwise, an excellent high-energy-efficiency HVAC design means nothing after a few years when all the control devices are not accurate anymore.

Carbon dioxide (CO2) sensors and carbon monoxide (CO) sensors are commonly used in HVAC systems. CO2 sensors are mostly used to make sure the people living in the building have sufficient oxygen and the CO2 level is not dangerous.

On the other hand, carbon monoxide (CO) sensors can be found in underground basement carpark floors. They are used to detect the level of CO that is emitted by cars' exhaust. If the CO level is too high, ventilation fans will operate to replace the basement air with fresh outdoor air.

CO2 and CO sensors often use DDCs or direct digital controllers to communicate with the associated ventilation fans. Because these sensors are not as simple as a few data points, they require to communicate using a protocol such as BACnet or Modbus.

A typical residential building can have 3 floors of basement carpark. Depending on the floor area, the total number of CO sensors can be around 40 units. Usually, a DDC can only connect up to around 10-12 CO sensors depending on the specification. So, the system may have 4 DDCs.

The function of DDCs is to collect all the data points from all the CO sensors. Then, all DDCs are connected to one network device where it is sort of like a central processing device. Engineers and programmers install a program into the network device to control the behavior of the ventilation fans based on the signals coming from the CO sensors.

In a more complex control system, a PLC or programmable language controller may be required to perform multiple tasks based on multiple inputs from multiple sensors, valves and other control devices.

With a program, we can tune and fine-tune the result as desired. The fine-tuning work is generally not restricted by hardware. As long as we have sufficient hardware to cater to the data points, we only need to play around with the software to get the perfect result.

The program may look something like “if CO sensor A = 45ppm, ventilation fan A = run”. I'm not a programming expert so pardon me if it looks too simple. Nevertheless, it is basically what I learned from my HVAC projects.

With the above three examples, you have the basic concept of HVAC controls. If you encounter a more complicated system, just break them down as small as you can and apply the concept. You'll find it is all controlling the same way.

Most of the time, you'll find a dry contact signal in air conditioners' signal feedback and fire relays. In commercial buildings, there may be thousands of air conditioning units. Hence, the building control room must be able to see the operation status of all air conditioners.

So, air conditioners will give a “run signal” whenever they are triggered to run and the signal is often in the form of a dry contact. Relays are served to receive the dry contact signal and many other types of signals such as 12Vdc and 24Vdc.

When the air conditioners are triggered to run, they closed the “run status” contact thereby allowing the 24Vdc to pass through and energize the relays and thus, giving a “run signal” to the control room. Such a signal is called dry contact for the air conditioners, meaning they don't give any power but only closed the contact.

Dry contact signals are also commonly found in fire signals. During a fire, the building's fire protection system will send dry contact signals to all HVAC equipment in order to trip and stop their operation to prevent the spread of smoke.

If a Modbus machine wants to communicate with a BACnet machine, a converter or a “language translator” device can be used. Otherwise, the Modbus code must be provided to the BACnet programmer for him/her to manually translate (see what input results in what output).

So, there you have it. These are the basics of HVAC controls. If you haven't subscribed to my newsletter, I encourage you to do so because I post new articles like this frequently and you wouldn't want to miss them.