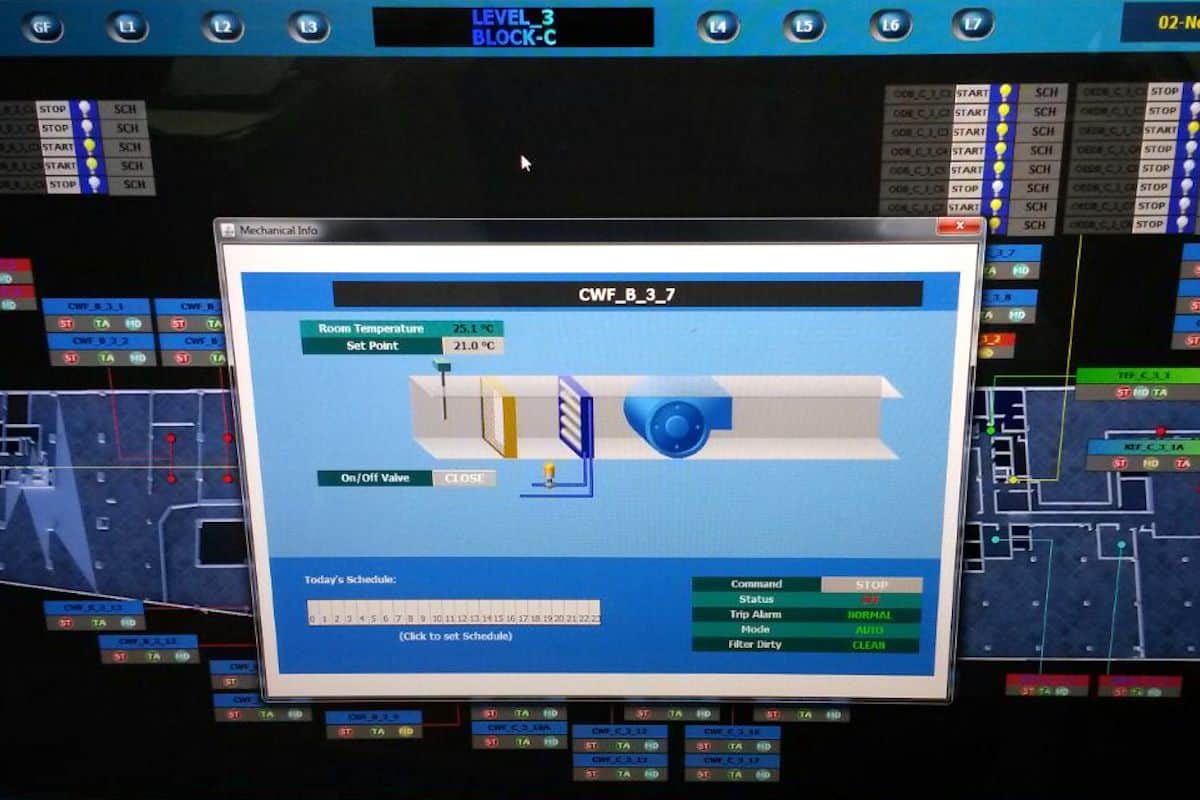 BMS integration is becoming an essential part of HVAC. Many air conditioners, ventilation fans, sensors and controllers are remotely monitored and controlled by BMS. So, what exactly is the integration between HVAC and BMS?

HVAC integrates with BMS to allow building operators to monitor and control the HVAC system from a distance. In addition, operators can anticipate service intervals and potential breakdowns. The best thing about HVAC BMS integration is that it provides the opportunity for energy optimization.

The integration between HVAC and BMS is more than just providing conveniences. By centralizing the HVAC system, there are a lot of optimizations can be done.

To understand the integration between HVAC and BMS, we need to know what is BMS. First of all, BMS stands for building management system. Sometimes, it can be used interchangeably with BAS or building automation system.

HVAC systems, particularly heating and air conditioning, naturally consume a lot of power. Hence, in order to prevent the system from consuming more power than it is supposed to, regular service and maintenance work must be carried out to maintain the efficiency of the system.

However, HVAC systems are often not serviced and maintained well because people usually don't pay much attention if the systems are still working or sometimes, workers are just lazy.

Relevant post: What are Differential Pressure Sensors in HVAC?.

The list go on and on and you can see why it is understandable that without a centralized monitoring system, many things can be missed out and thus, the efficiency of the HVAC system can deteriorate rapidly.

Nowadays, new buildings are mostly equipped with BMS. It connects various HVAC components to collect the necessary data and displays it graphically in the building's control room.

Previously, BMS was not user-friendly. Today, BMS can show charts, graphs, trend lines and even animations. Still, the graphics are no way near to iPhones and laptops, just to be clear.

What HVAC Components Integrate with BMS?

Many HVAC components integrate with BMS. Some of them are meant for monitoring only while some allow the BMS to override and control remotely.

Air handling units (AHUs), as well as fan coil units (FCUs), are also connected to BMS. However, BMS usually doesn't control the operation of AHUs and FCUs rather, it leaves the control to local thermostats. Still, the BMS always records the energy usage pattern.

Cooling towers are also integrated with BMS. Operators can monitor the start and stop of cooling towers and compare it to the operation of chillers. Besides, they can check local climates such as dry bulb and wet bulb temperatures.

Ventilation fans include smoke extraction fans, pressurization fans and exhaust/fresh air fans for mechanical rooms are integrated with BMS. However, toilet exhaust fans are usually not connected to BMS because the impact is not significant.

How HVAC Integrates with BMS?

When it comes to the integration between HVAC and BMS, many people have a hard time understanding how they communicate, including me in the past.

HVAC units usually communicate with BMS via the BACnet protocol. BACnet stands for building automation and control network. It is a communication protocol developed by organizations such as ASHRAE, ANSI and ISO in an effort for standardization.

On the other hand, many HVAC units also communicate with BMS via the Modbus protocol.

In building construction, BACnet is generally easier to work with and Modbus requires some manual data entry works to get it going. Nevertheless, a “protocol converter” can be used to translate Modbus to BACnet.

For BACnet communications, you only need to connect a CAT5 cable to the HVAC display controller like a PLC controller. Such communication is known as high level interface.

Hence, with Modbus, you'll have a lot of more cables to deal with. Whereas, with BACnet, you only need one CAT5 cable for each HVAC system. However, Modbus connections can be taken directly from control panels and the HVAC unit itself while a separate PLC controller is needed for BACnet connections.

Chillers, BTU meters, flow meters, digital power meters are some of the HVAC components available for BACnet communications I can think of. Others like fans, AHUs and FCUs are using Modbus.

When HVAC integrates with BMS, there are a few categories of data collected and sent to BMS for monitoring and control purposes.

On/off status is a basic requirement from BMS. Air conditioners and fans that cycle on and off the need to provide a feedback signal to tell the BMS whether they are running or on standby. Often, the BMS will display such a signal in graphics with green color and grey color representing run and standby respectively.

Trip alarm is also one of the basic requirements from BMS. Whenever there is a problem with the air conditioners or fans, a trip alarm signal must be triggered and sent to the BMS to indicate a faulty. Usually, it is displayed in red color graphics on the BMS. Sometimes, the BMS may demand to read the error codes of air conditioners.

BMS record and use the operating hour to control the operating sequence of air conditioners and ventilation fans to ensure that all of them have an equal and balanced load. So, it prevents one of the units from working too much and having an exceptionally high operating hour.

Some air conditioners are equipped with a differential pressure sensor to detect the pressure drop across their filter thereby indicating a filter service. By capturing that pressure data, operators can see the filter status of all air conditioners with ease from the control room.

Again, the above are some of the common data collected by BMS I can think of. I'm sure that the HVAC system is feeding a lot more data to the BMS system.

Furthermore, BMS can perform calculations internally, within the system, to produce results that are not directly taken from the HVAC system. For example, with the temperature data from two different temperature sensors and a flow rate, the BMS can calculate the energy usage or BTU, replacing the need for a BTU meter.

The integration between HVAC and BMS is important for the sustainability of high-performing HVAC systems. Without BMS, the maintenance of HVAC systems is inefficient and often compromised.

As an HVAC engineer, you don't have to know all the details of the HVAC BMS integration but a few important aspects to work more efficiently such as the protocol used, the signal required by BMS and the calculations that can be done to produce data without a direct physical connection.

For details on the control of the HVAC system itself, see my post 5 Types of HVAC Controls (Thermostat, 0-10V, DDC & Dry Contact).