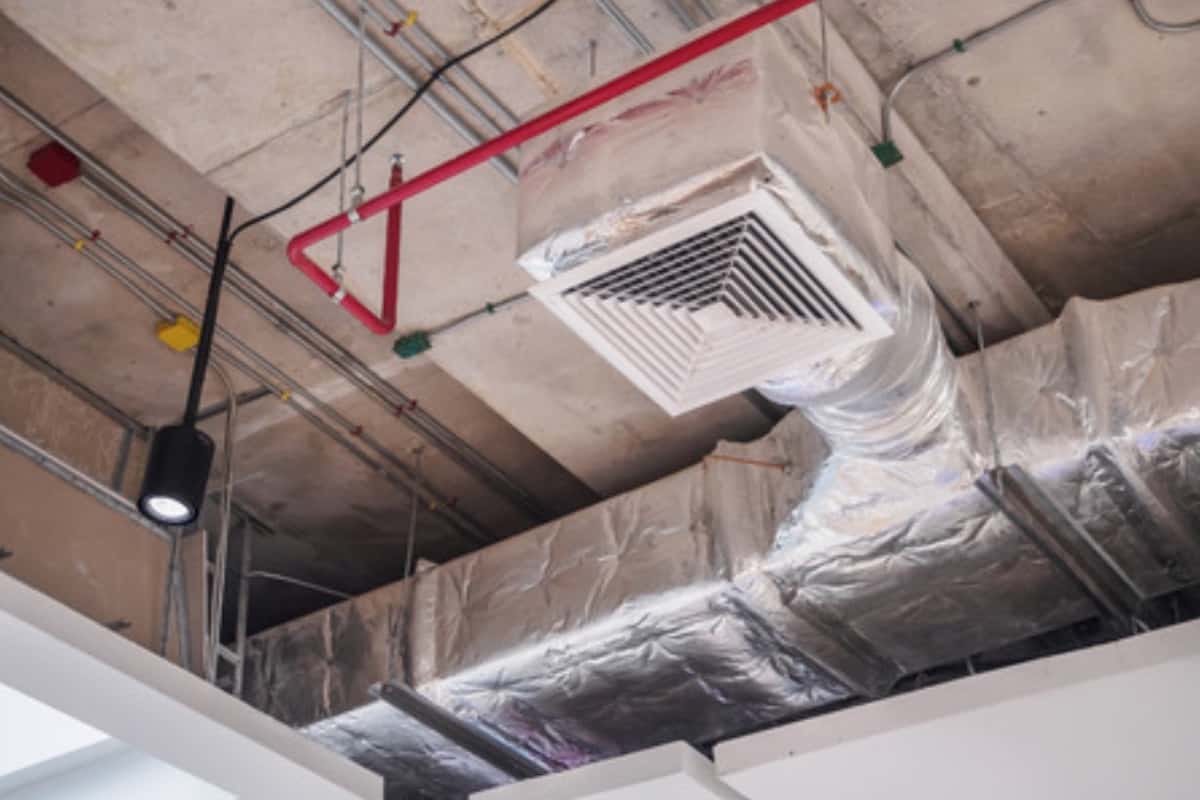 Plenum boxes are crucial to the performance of the HVAC system. There are a few types of plenums in HVAC but where do you find them and how they actually work? So, I gathered the 4 common types of HVAC plenums.

The 4 common types of HVAC plenums are:

Without further ado, let’s take a deeper look into each HVAC plenum.

Relevant post: 6 Types of Supply Air Diffusers and Their Applications.

Conversely, when a flexible duct is connected on the top of the plenum box, cold air flowing into the plenum box is then discharged straight out of the linear diffuser. It can be viewed as if there is no diffuser at all.

Therefore, people sitting under the linear diffuser may feel too cold and uncomfortable.

Linear diffusers have adjustable fins for users to redirect airflow at will. However, high-velocity airflow is uncontrollable. A plenum box slows down the supply airflow and enables the control of the airflow direction.

Most plenum boxes have a built-in opposed blade damper to regulate airflow. Every supply air diffuser has a specific airflow. Too much airflow will generate unwanted noise, too little airflow will not be able to provide sufficient cooling.

Typical linear diffusers don’t have a damper by themselves. They need a plenum box in order to have a damper to regulate their airflow.

For example, a 4-way diffuser can have a radial fan blade damper without having a plenum box.

On the other hand, linear diffusers require a plenum box to have a damper in order to control the airflow.

Other than linear diffusers, some diffusers also require a plenum box in order to regulate their airflow. These diffusers are the types of diffuser that don’t allow users to access its damper like the 4-way diffuser. They are usually the costly diffusers that have better looking.

Users must use the damper on the plenum box to adjust the airflow as necessary.

Both the fresh air and the return air are mixed together inside the plenum box before passing through the cooling coil of the air conditioner and supply to a room.

The plenum box on ducted air conditioners also has a damper to regulate airflow. Usually, a damper for return air is not necessary while a damper for the outside air is a must.

Using the space above the ceiling as the plenum for air conditioners is a clever way to save costs for the air conditioning system.

However, the ceiling opening for return air must be carefully designed as well as the return air grilles must be adjusted properly to even out the return airflow and therefore, prevent unbalanced cooling.

One of the drawbacks of using the ceiling plenum as the return air plenum is noise. Because of the ceiling openings, the noise of air conditioners appeared to be louder as the noise is transmitted effortlessly through the openings.

Contrarily, air conditioners with return air ducts and a plenum box can reduce noise by internally insulating their return ducts with some fiberglass or Rockwool.

Another problem with the ceiling plenum is the infiltration of hot air. When the space above the ceiling is used as the return air plenum for the air conditioning system, the said space is always at a negative pressure state.

Hence, hot air from non-air-conditioned spaces (eg: toilet, store and even outside the building) can sip through gaps on the wall and enter into the ceiling plenum.

Air handling units (AHUs) often use their own room as the return air plenum. These AHUs connect ducts only at their supply air outlet. The room itself also has a fresh air opening with a damper to introduce outside air. The entire room act as a return air plenum for the AHU.

Save Valuable Space for Commercial Use

Therefore, more spaces are available for commercial use.

However, it doesn’t affect the performance of the AHU as long as the infiltration from the door and wall gaps are considered. Nevertheless, people will have a hard time opening the door if the suction is too strong.

Many buildings wanted to have more space for commercial use. They often allow only limited space for AHUs. Many times, AHU rooms are too small for proper return air plenum and ductwork.

Often, the ductwork inside small AHU rooms is done badly due to limited space. Poor ductwork may create extra air resistances and leakages which can cost the building owner more on the electricity bill.

By using the AHU room as the plenum, the return air plenum and ductwork are eliminated. Thus, poor ductwork can be avoided. However, noise is another issue to tackle.

Without the return air plenum attached on the AHU, the motor noise is louder. But, this can be resolved by soundproofing the room using Rockwool.

If you are curious about why we need to use a plenum box, check out my post What is a Plenum Box? (Purpose on FCUs and Diffusers).