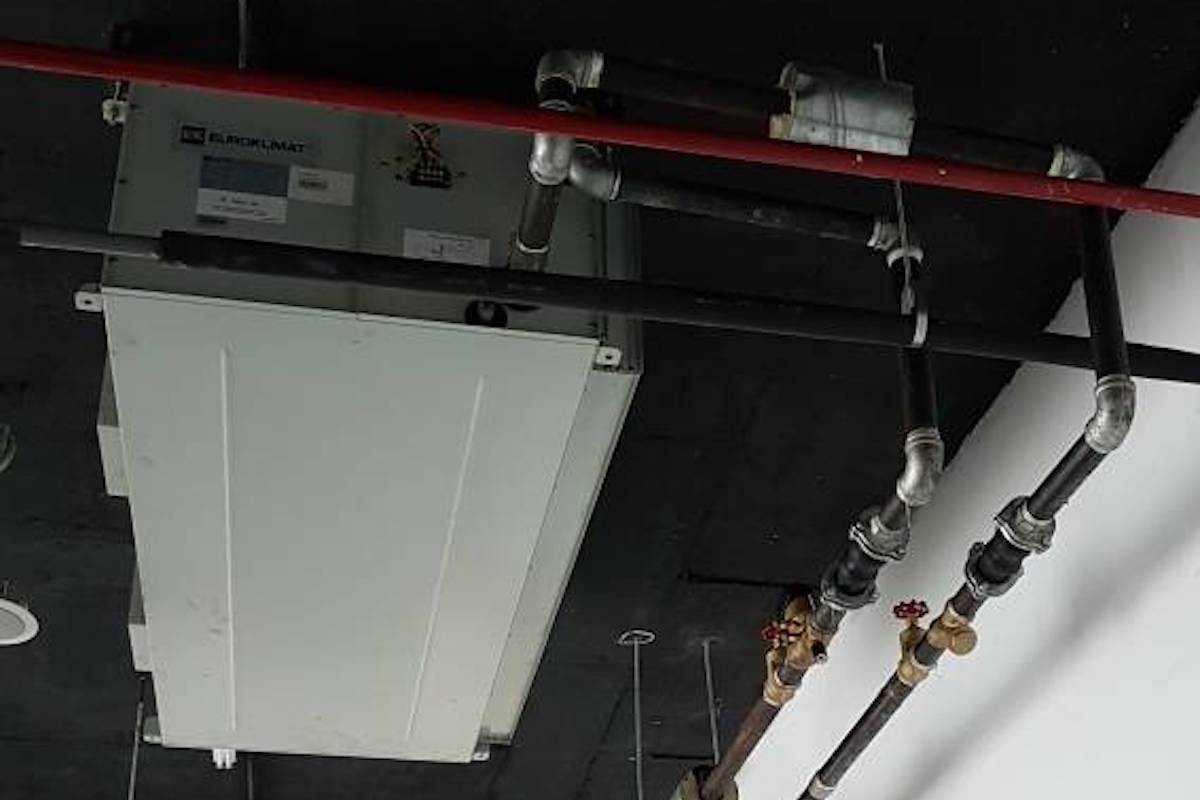 Chilled water fan coil units may look simple than air handling units but if you worked on them in a construction project before, you’ll know that they are quite complicated too.

Unlike air handling units that often use a modulating valve, fan coil units usually use an on/off valve only. An on/off valve is only capable of fully-opened or fully-closed; it can’t stay in between.

In my previous blog post about the 4 common types of actuators in HVAC, I mentioned that a chilled water on/off valve is mostly made of a ball valve or globe valve and an on/off actuator.

Because chilled water fan coil units are generally small in their cooling capacity, using a modulating valve to control the chilled water flow rate does very little help in terms of temperature precision and energy efficiency.

From the above diagram, the flexible joints are usually optional because some chilled water fan coil units are very small in physical size and capacity and thus, they don’t cause a significant vibration that needs flexible joints.

However, all chilled water fan coil units require a y-strainer, a control valve (a PIBCV or a basic on/off valve) and a pair of isolation valves. The y-strainer is used to prevent dirt such as sand from damaging the cooling coil while the isolation valves are used to isolate the unit during maintenance.

Nevertheless, the new type of chilled water pipe may not require the bypass.

Furthermore, the pressure and temperature gauge are very handy during and after the construction of the chilled water system. However, they are not mandatory accessories for the chilled water fan coil unit. In addition, a ceiling manhole must be allocated under the PIBCV valve, y-strainer and isolation valves for service access.

The most common type of chilled water fan coil unit (CHWFCU) is the ceiling ducted type. In a typical high-rise building, a 12,000 BTU (3.5kW) CHWFCU is often used for the lift lobby. Large CHWFCUs can go up to 50,000 BTU while the largest CHWFCU I’ve seen is about 365k BTU.

Most ceiling ducted CHWFCUs have 4 components; a) cooling coil, b) blower fan, c) air filter and d) return air plenum. Sometimes, the return air plenum is not required when the ceiling plenum box is used instead.

However, ceiling cassette CHWFCUs often don’t have as many functions as the ceiling cassette unit found in the split and VRF system. Most of the time, they only have on/off controls, temperature controls, air swing controls and fan speed controls.

To learn more about chilled water system and all the components involved, purchase and download the Chilled Water System (eBook).

Participate in the course survey to help the development of the online course
and get a special offer when the course is launched.