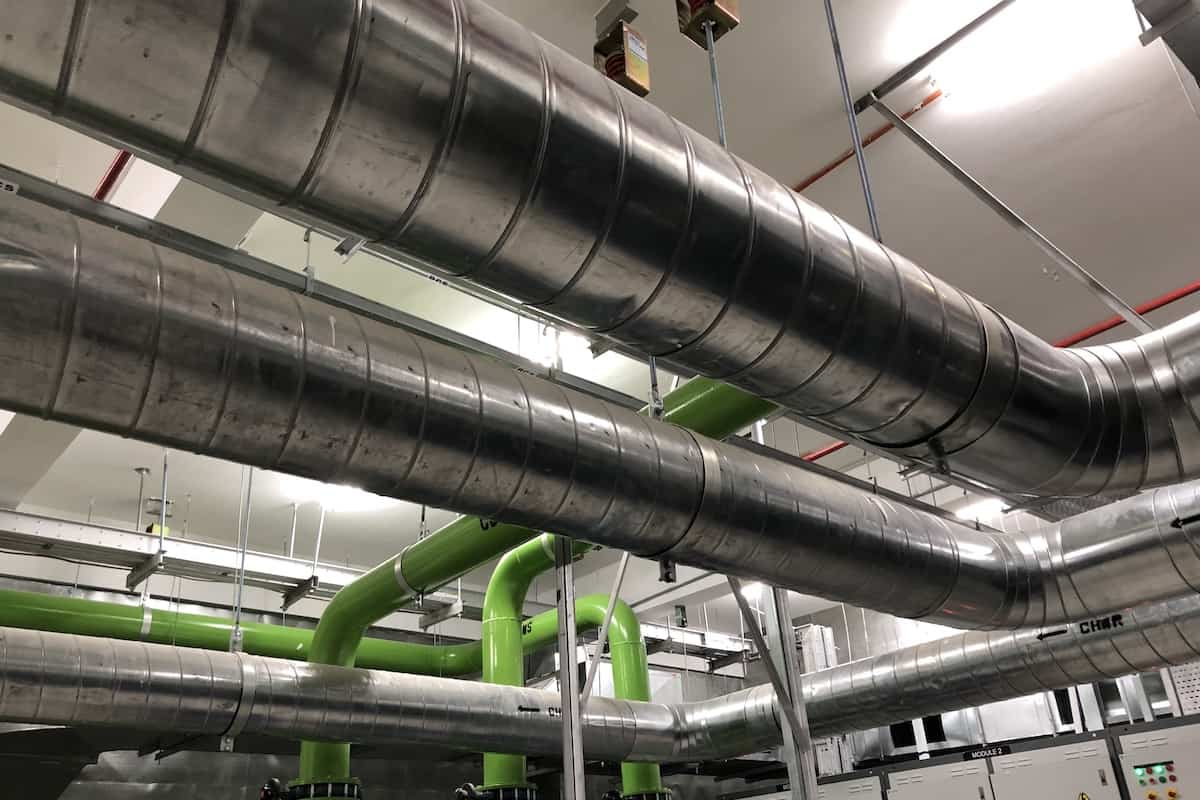 Many people thought that black steel pipes are different from carbon steel pipes. They did not realize that both pipes are actually the same thing when used in the chilled water system.

Most chilled water pipes are pre-insulated. Just to be clear, we are talking about the carrier pipe of pre-insulated pipes here. With that said, let’s look at the different types of pipes used for chilled water and unpack the myth.

Steel pipes are made of a mixture of alloy and carbon. When there is more carbon in a steel pipe, it is referred to as a carbon steel pipe. In contrast, an alloy steel pipe has other elements in it. Our friend Jonathan helps me to differentiate them in his post.

“We use black steel pipes for chilled water, not sure about carbon steel pipes.”

Carbon steel pipes or black steel pipes are not galvanized which means that they rust. Many chilled water pipes had already rusted mildly when they arrive at the site. They were kept in a warehouse for quite some time before the supplier delivers them to the site.

However, a plastic end cap is usually put at both ends of a chilled water pipe to slow down the rust and also, makes them look a bit nicer and not looking like an old stock or something.

Nevertheless, no need to worry about the rust because upon the completion of chilled water pipes, we’ll flush them to clear out all the rust. Then, the chemical treatment of the chilled water system ensures that the rust does not build up (ideally).

For chilled water applications, carbon steel pipes have three types. Each type is used for different pipe sizes. At the same time, they are manufactured in accordance with different pipe standards.

Chilled water pipe sizes from 15mm to 150mm are using welded mild steel pipes manufactured in accordance with BS 1387 Class C standard. Such manufacturing technique involved welding as opposed to seamless which is done through cold draw or hot roll.

Carbon steel mainly has three types which are low carbon, medium carbon and high carbon. Low carbon steel is usually referred to as mild steel. Some people break carbon steel down into 4-5 types, each with a different percentage of carbon but we don’t need to go into that detail.

BS 1387 Class C is also called BS 1387 Heavy Gauge. The “Class C” is equivalent to the “Heavy Gauge”. They are the same thing. Nevertheless, if you are looking for a cheaper option, Class B or Medium Gauge is feasible.

Chilled water pipe sizes from 200mm to 450mm are using welded carbon steel pipes manufactured in accordance with JIS G3452 standard. Such manufacturing techniques also involved welding and have weld lines. Pipes are more suitable for transferring water rather than gas when you have weld lines.

The pipe wall thickness for chilled water pipes to API 5L Grade B can be either 7.9mm or 9.5mm. Needless to say, 9.5mm wall thickness offers better strength at a higher cost.

Here is a summary of pipe standards for different pipe sizes:

When carbon steel pipes or black steel pipes are coated with a layer of zinc, they are galvanized and become corrosion resistant. The pipe standards used are the same, just galvanized.

On a side note, galvanized carbon steel pipes used for condenser water look very different from chilled water pipes because they are not insulated.

Stainless steel pipes are even better in corrosion resistance than galvanized carbon steel pipes. Hot water is used for people to bathe, wash hands and dishes. Hence, contamination in water is strictly not allowed.

Nevertheless, seaside chilled water pipes may choose to use stainless steel instead of galvanized steel to better withstand the corrosive working environment.

However, a new type of pipe was introduced a few years ago to replace the traditional carbon steel pipe. This new pipe is the pre-insulated HDPE (high-density polyethylene) chilled water pipe.

I was introduced by a friend expert in HDPE pipes. At first, I was skeptical just like everyone else. Then, I quickly realized that this type of pipe is actually significantly better than carbon steel pipes.

Some people may be familiar with HDPE pipes because the jacket/cladding of underground chilled water pipes is made of HDPE material. But, the HDPE pipe I’m going to talk about is not the jacket but the carrier pipe.

The carrier pipe of pre-insulated HDPE chilled water pipes is made of high-density polyethylene. Polyethylene itself is completely recyclable and has no negative environmental effects. Furthermore, HDPE life expectancy is more than 50 years.

While traditional carbon steel pipes are joined by welding, new HDPE chilled water pipes are joint like legos. Basically, you hang two HDPE pipes and leave a gap for the socket. Then, you push both pipes into a socket and use a sort of heating machine to fuse the joint.

Such a jointing method is more or less similar to how plumbers joint PPR pipes. You’ll be given all the pre-insulated joints such as elbows, reducers and sockets. Then, you’ll need a jointing machine for the fusion.

Here is a video on how HDPE chilled water pipes are installed:

Overall, the installation process is faster, cleaner and safer.

However, this new type of pipe has some drawbacks. As you may have guessed, HDPE pipes are expensive. With all the pre-insulated joints and machinery, the whole piping system material cost is expected to be about 40-50% higher than traditional carbon steel pipes.

Thus, HDPE pipes are said to have a higher barrier of entry. The initial cost is extremely important when it comes to construction projects. Hence, the adoption rate is slow.

However, labor cost and installation time are reduced drastically with HDPE pipes which may be able to justify the higher material cost.

Furthermore, plastic pipes won’t rust or corrode over time. So, there is a saving on the maintenance of the chilled water system. Hence, the return on investment may be attractive.

Nevertheless, using HDPE material for chilled water pipes may be unheard of in many regions of the world. Although the initial cost is higher, I do think HDPE pipes overall are better than carbon steel pipes.

The most common type of pipe used for chilled water is carbon steel pipes. Most chilled water pipes are non-galvanized and rust over time. But, the chemical treatment of the chilled water system keeps the rust under control.

If corrosion resistance is required, carbon steel chilled water pipes can be galvanized. Otherwise, stainless steel pipes are an option but they are very expensive.

HDPE pipes are beneficial to contractors and building owners. However, HDPE pipes must be able to justify the return on investment or else, the adoption rate will be slow.