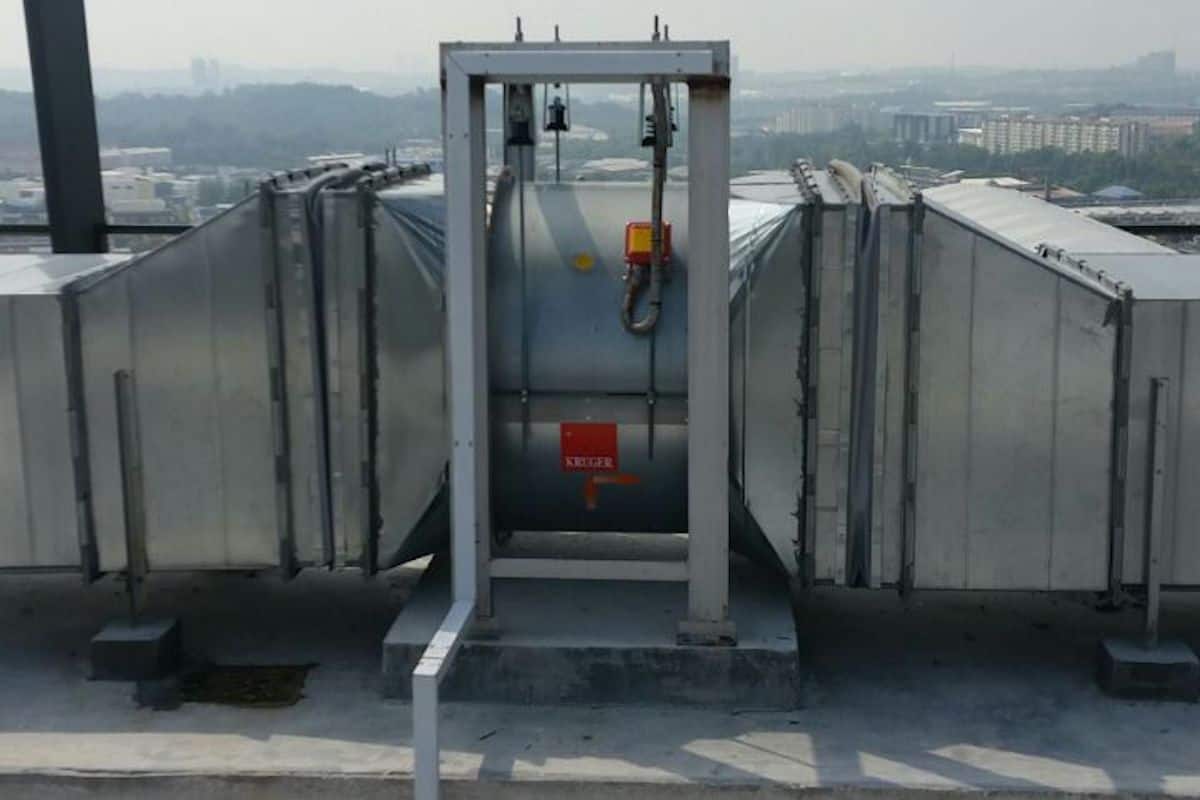 Fans are one of the major elements in HVAC. Mechanical ventilation in buildings requires fans. But, there are many different types of fans in the market. So, what are the common types of fans used in HVAC?

Generally, there are 5 common types of fans in HVAC as follow:

Different HVAC fans have different characteristics and because of that, their applications also differ. Some types of HVAC fans can be applied in different fields while others are specifically made for certain applications.

Smoke spill vane axial fans arguably are the most important type of fan in HVAC. They are responsible for smoke extraction, staircase pressurization and lift lobby pressurization which is related to people’s life.

In HVAC, there are two types of axial fans; a) vane axial fan and b) axial fan. Vane axial fans are physically longer and they are able to handle a higher external static pressure than axial fans.

Smoke spill vane axial fans are round in shape. They need a round-to-rectangular duct fitting on both ends for duct connection. Besides, they also need a pair of fire-rated canvases to absorb the movement during startup. Learn more about the detail of HVAC fan duct connections.

Furthermore, a typical smoke spill vane axial fan requires 4 vibration isolators in between its slab supports before it is anchored onto the slab to prevent the vibration of the fan from transmitting to the floor above.

Often, smoke spill vane axial fans are the largest type of fan in HVAC. Their physical dimension can go up to 2000mm in diameter and their airflow capacity can go up to 450,000 m3/hr.

Smoke spill vane axial fans often use a Class H motor with a minimum of IP54 for enclosure protection. Their impeller pitch angle can be manually adjusted when necessary (eg: undersized or oversized).

For installation, smoke spill vane axial fans can be hung from the slab or sit on the floor with a support frame. They typically connect to large ducts in the basement or in a mechanical room depending on applications.

During operation, smoke spill vane axial fans produce a loud noise. Hence, they are always placed inside dedicated mechanical rooms, far away from the crowd.

Because smoke spill vane axial fans are huge, they must be initiated gradually to prevent power surges. So, an auto-trans starter or a star-delta starter is used to gradually speed up the fan.

It is considerably dangerous to stay near a large smoke spill vane axial fan during initial startup. Any loose part will be lethal as the giant impeller spins at more than 1500 RPM.

The primary reason to use cabinet in-line centrifugal fans is low noise operation. With a housing (cabinet), the noise produced by the centrifugal fan is greatly suppressed.

Unlike smoke spill vane axial fans, smoke spill cabinet in-line centrifugal fans are square in shape. They are much quieter but they can’t deliver as much airflow as axial fans. Furthermore, cabinet fans are very expensive. Their cost can be 2-3 times more than axial fans.

With the motor separated from the blades, maintenance is easier given that enough space is allocated. However, the belt needs to be checked periodically or replaced when necessary in order to maintain the performance of the fan.

Apart from having a cabinet, conventional in-line centrifugal fans (without a cabinet) are also very common in HVAC. They are used to ventilate toilets where noise is not a concern.

In-line mixed flow duct fans are mostly used to ventilate toilets and mechanical rooms. Most of the time, they are small in airflow capacity and non-fire-rated.

Wall-mounted propeller fans are the simplest form of ventilation fan in HVAC. Often, they are coupled with auto-shutter or gravity-shutter where their louver will automatically close when their fan is not in operation.

The main disadvantage of wall-mounted propeller fans is noise. So, some people prefer to use a mixed flow fan than a propeller fan that doesn’t have noise suppression.

However, the biggest advantage of wall-mounted propeller fans is simplicity and low cost. They are very easy to install, use, maintain and repair. Furthermore, they are not concealed above the ceiling which makes the installation process quick.

Although some propeller fans can handle large airflow, most wall-mounted propeller fans are used when the airflow requirement is around 100 m3/hr due to noise concerns.

A conventional power outlet can power a small capacity wall-mounted propeller fans. Most of the time, a starter is not required unless operation control is needed.

Induced jet fans usually come in a pair. They are mostly used to extract smoke from basement carparks. However, many countries are starting to ban the use of induced jet fans for smoke extraction due to effectiveness issues.

Nevertheless, induced jet fans are still used in many buildings, especially those with very low floor-to-floor height. They don’t have sufficient space for smoke extraction ducts.

Other than that, induced jet fans can also be used as basic exhaust fans to ventilate basement carparks.

To learn more about the different components used in HVAC, purchase and download the HVAC Basics (eBook).