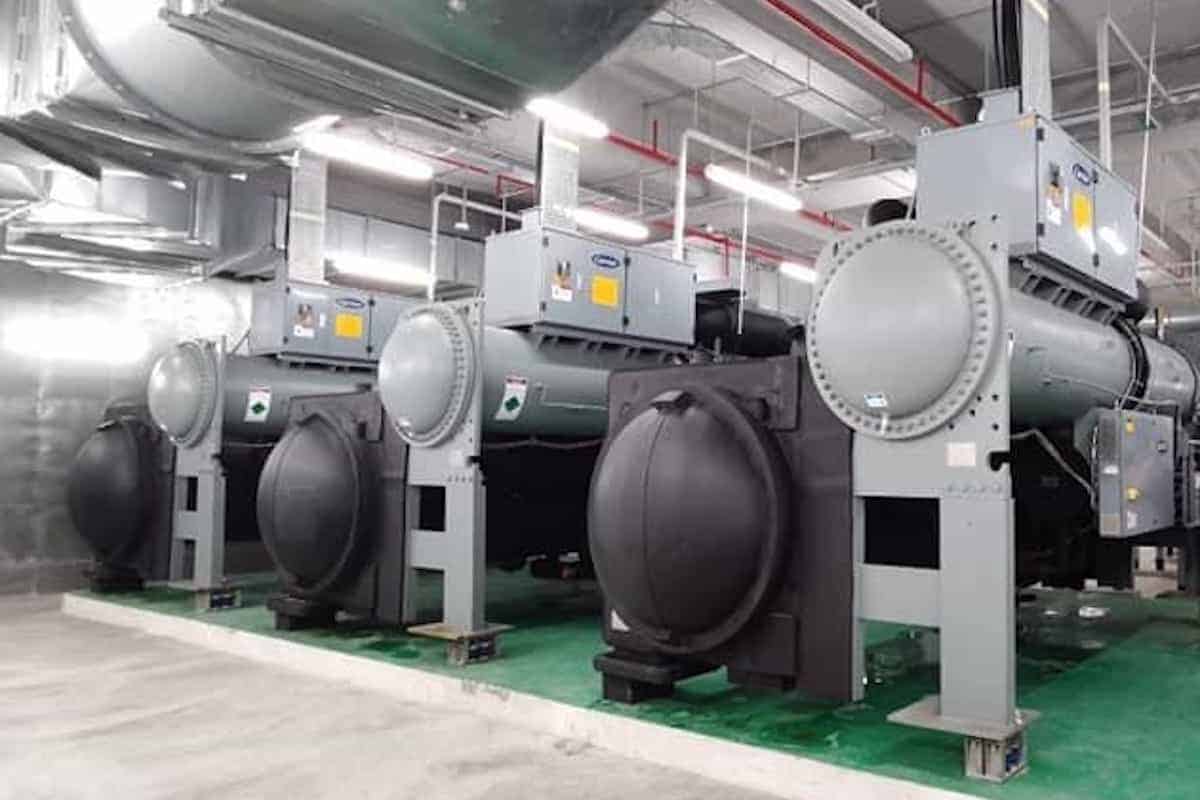 A typical water-cooled chilled water system consists of 4 major components as below:

Each component has a lot more to talk about but, in this post, I'll give you an overview of them and explain through the chilled water system as a whole.

Below are two chilled water system diagrams that I've made to explain how it works:

Instead of just blocks with texts, here is the same diagram but with actual photos:

Conversely, the condenser water loop is an open piping system. Hence, the make-up water tank is used to refill water losses due to evaporation at the cooling tower.

Inside the chiller is where the basic refrigeration cycle happens. A chiller is made up of the 4 major components required for the refrigeration process which are: a) compressor, b) condenser, c) evaporator and d) expansion valve.

Below is the refrigeration cycle that happens inside a water-cooled chiller:

The chiller itself is a giant air conditioner. The chilled water pump pushes the water through the evaporator of the chiller thereby cooling the water.

At the same time, the condenser water pump pushes another loop of water through the condenser of the chiller to carry away the heat energy.

Below is how the chilled water and the condenser water flow at the chiller:

The temperature different between the refrigerant and water is called approach. For more details, see my post What is Chiller Approach?.

Below is how the chiller shell and tube heat exchanger works:

Whether it is chilled water or condenser water, the water passes through the tube while the refrigerant passes through the shell. If we dive deeper, there are actually two types of water-cooled chillers; a) flooded type and b) dry type.

On the other side, air handling units (AHUs) and fan coil units (FCUs) are basic air conditioning units that are made up of mainly 4 components; a) cooling coil, b) fan blower, c) air filters and d) condensate drain line.

Below is how an air handling unit provides cooling using chilled water:

The chilled water from the chiller enters the cooling coil of the air handling unit (AHU) usually at about 6.7°C (44°F) and leave at about 12.2°C (55°F). The AHU blows air through the cooling coil and provides cooling to the room.

Since the cooling coil is very cold, water droplets will form on the surface of the coil. Thus, a condensate drain line is needed to discharge the condensate water. At the same time, air filters are used to protect the cooling coil from dust just like any other air conditioner.

Every AHU and FCU is fitted with a motorized water control valve. They usually use a separate thermostat to detect the room temperature and control the chilled water flow rate (by controlling the motorized valve) to control the amount of cooling given to the room.

After absorbing heat from AHUs and FCUs, the chilled water returns back to the chiller to release the heat to the condenser water.

Below is the basic working principle of a cooling tower:

Below is the refrigeration cycle that happens inside an air-cooled chiller:

Below is the basic working principle of an air-cooled chiller, showing how the chilled water moves in/out and how it rejects heat to the ambient air:

So, as you can see, both water-cooled and air-cooled chillers are essentially operated by the same principle. At the chiller, there is the refrigeration cycle. Then, water is used to move around the energy.

A finned-tube heat exchanger is just like any home air conditioner where there are many layers of alunimium fins that help to dissipate heat faster.

One of the elements that determine the efficiency of chilled water systems is delta T or the difference between the chilled water supply and return temperature.

One of the common problems in chilled water systems is low delta T syndrome. The problem basically is low chilled water return temperature that can be caused by multiple different issues such as dirty filters/coils, imbalance water flow and oversized air handling units.

Carbon steel pipes are made of steel and thus, they do rust over time. Hence, the flushing process is very important to remove any contaminant before the initial startup of the chilled water system. Furthermore, water treatment is essential to maintain the quality of the chilled water and the condenser water.

Air-cooled chilled water systems are more common in medium-sized buildings where there is not enough space for a dedicated chiller plant room. Instead, air-cooled chillers are placed on the roof.

When it comes to large buildings, the chilled water system is almost always run by water-cooled chillers.

Because district cooling plants have very large chillers, they are considered the most efficient way of cooling buildings because the chiller plant room efficiency is very high.

Sometimes, commercial buildings get penalized by the district cooling plant operating company if the cooling load is low.

However, thermal energy storage systems can't be applied everywhere because their sole purpose is to reduce electricity cost by taking advantage of the off-peak electricity rate.

Most of the time, a thermal energy storage system is found in a district cooling plant. Both are large cooling systems and thus, it makes sense to integrate both systems.

During the day, large water-cooled chillers supply chilled water to several commercial buildings as usual. At night, cooling demand drops and some of the chillers will shut off.

However, some of the chillers remain in operation to supply chilled water into a large thermal energy storage tank. Inside the tank, there are hundreds, if not thousands of glycol balls that use the principle of latent heat capacity to store a large amount of cooling energy for later use.

These glycol balls have incredible heat capacity. When the tank is filled with chilled water, each liquid glycol ball turns into ice glycol balls. The phase change makes them storage a huge amount of cooling energy.

While transferring the cooling energy from the chillers to the glycol balls, the electricity cost is at the lowest because of the off-peak rate.

After the glycol ball cooling energy is depleted, the system switches back to the conventional chiller-based cooling system.

A high efficient district cooling plant with thermal energy storage can save a huge amount of electricity cost. However, the energy usage is actually more than the conventional pure chiller-based cooling because of energy losses.

I reviewed and compared hundreds of air conditioners. These are my latest recommended products. Check them out if you're looking to buy one!

link to How to Calculate Chilled Water Pump Head?

Pump head is an essential parameter for chilled water pumps as well as condenser water pumps. It determines if the pumps are able to deliver the required water flow rate. So, how do you calculate the...

Most mini splits start with 9000 BTU. However, many people don't need so much capacity for their mini split because of their small room size. Hence, they are looking for the smallest possible mini...

Get notified of new posts and updates as well as receive offers from aircondlounge.

If you have doubt about your HVAC system, kindly contact me to seek clarification.