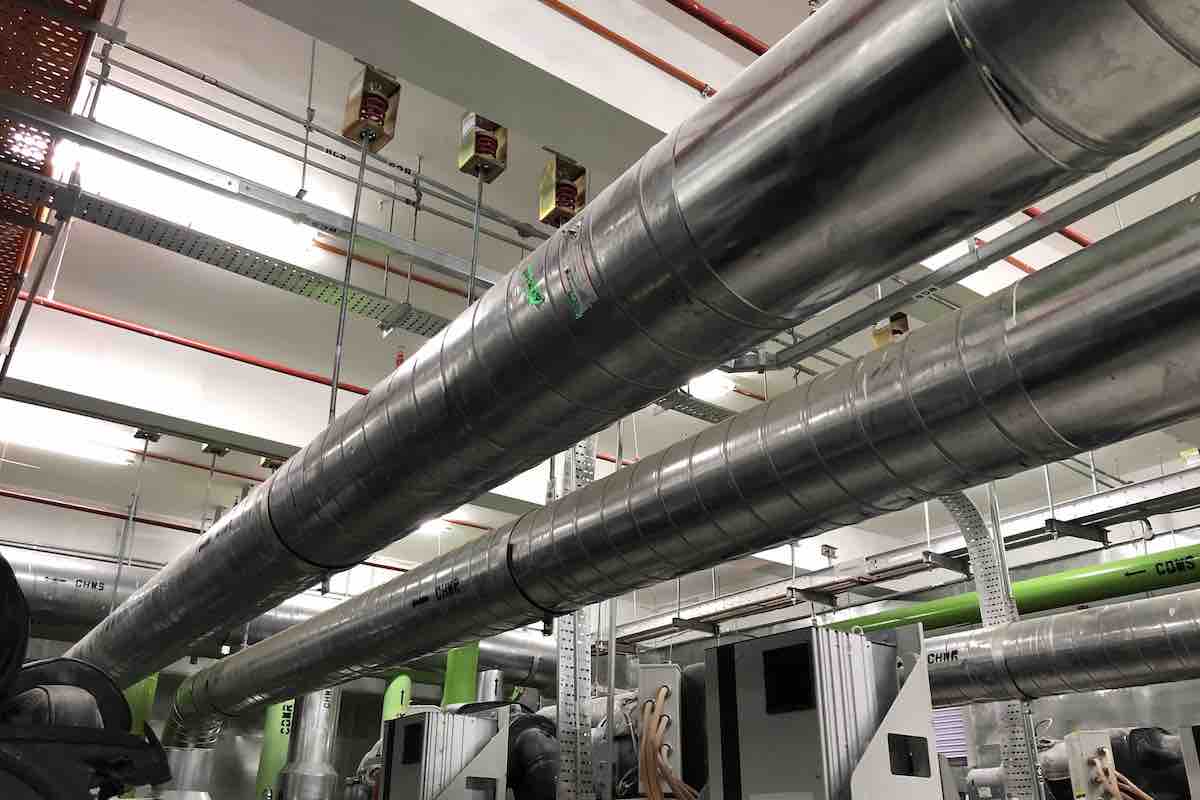 How to Read the Friction Loss Chart?

We’ll be using all 4 elements in the friction loss chart to size chiller pipes. Following, I’ll explain each of them and how we’re going to use them.

Friction Loss: How much resistance to the chilled water?

“A recirculating system is sized to provide a reasonable balance between increased pumping horsepower due to high friction loss and increased piping first cost due to large pipe sizes. In large air conditioning applications, this balance point is often taken as a maximum friction rate of 10 ft of water per 100 ft of equivalent pipe length.”

Flow: How much chilled water flowing inside the chiller pipe?

Flow or chilled water flow rate is the amount of water volume required to travel inside chiller pipes. Flow is expressed in gallon per minute (gpm). It is not hard to understand that pipes need to be sized based on water flow rate.

When it comes to sizing for the chiller pipe header, we simply add all the associated air conditioner chilled water flow rates and use the chart again to find the corresponded pipe size.

Velocity: How fast is the chilled water moving inside the chiller pipe?

The above table shows the maximum water velocity versus operation hours. The faster the chilled water move, the shorter the lifespan of the chiller pipe. I practice using not more than 10 fps for the velocity of chilled water.

Pipe Size: What is the resulted chilled water pipe size?

The resulted pipe size is expressed in inches. The pipe sizes indicated in the chart represent the actual pipe sizes that we can buy from chiller pipe suppliers. Chiller pipes have standardized sizes. There are no odd sizes such as 30mm, 60mm and 70mm unless custom made.

Some people may prefer other units of measurement. Here is a conversion table for your quick reference:

1. Fix the Friction Loss of the Chilled Water

2. Limit the Velocity of the Chilled Water

Most of the time, friction loss is the primary factor when sizing chiller pipes because small pipes are more common. Hence, we often forget that starts from around 400 gpm, the velocity becomes the primary factor. Therefore, many people made the mistake including myself.

For example, when sizing chiller pipes for 2,000 gpm flow of chilled water, if we just take the pipe size nearest to the friction loss, the resulted pipe size is not suitable due to high velocity as shown in Result A. On the other hand, Result B stays within the design criteria and thus, it is a more suitable pipe size.

Be Flexible with the Chiller Pipe Size

Sometimes, you may get into a situation where there are two choices or the resulted pipe size is very close. In such cases, you often need to decide between the performance, reliability and cost.

The above chart is an example of such a situation. For instance, if you are sizing a chiller pipe for 1,000 gpm flow of chilled water, you’ll get an 8″ pipe size with both the friction loss and velocity well under the design criteria. On the other hand, you may opt for a 6″ pipe size with the velocity just a little over 10 fps.

If you ask me, I probably will go for a 6″ pipe size, especially when the velocity is just 1 fps more than the design criteria which is 10 fps, considering the cost.

As a general rule, the cost of chiller pipes increase exponentially with the size due to not just material but insulation, jacketing, labor and logistic. One size bigger can be many times harder to install.

If you are done with pipe sizing, you might wanna check out my post on how to calculate valve pressure drop where I also included a calculator for it.