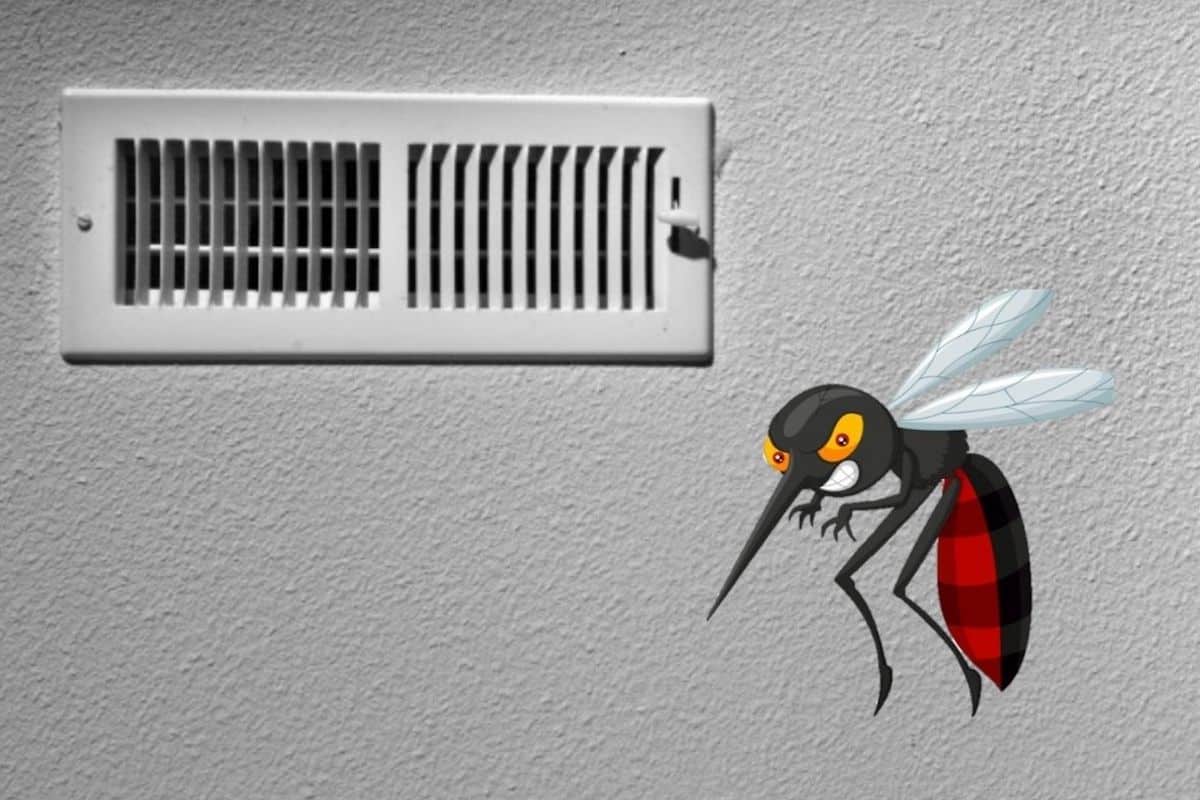 It is annoying when a mosquito buzzing around my ear when I sleep. It makes me wonder, can mosquitoes come through vents? So, I did some research.

Mosquitoes can come through vents. Mosquitoes can enter through the fresh air vent of air conditioners and the exhaust vent of ventilation fans. However, an insect screen can be installed behind a vent to block mosquitoes and prevent them from entering through the vent into a house or building. All vents on the exterior wall should always have an insect screen to protect against insects’ intrusion.

Some people have a hard time figuring out how do mosquitoes get into their house and they don’t realize that it is the fresh air vent and the exhaust vent.

How Do Mosquitoes Come Through Vents?

The above sketch illustrated how mosquitoes enter through vents, travel inside the duct and finally, reach inside the house. Obviously, mosquitoes can’t enter the exhaust vent when you are running the ventilation fan in the bathroom or basement. However, when the fan is not running at night, mosquitoes can sneak in through the exhaust ductwork.

How to Prevent Mosquitoes from Coming Through Vents?

One simple solution to mosquitoes coming through vents is to install an insect screen behind the vent. An insect screen is a fine mesh that can be made of metal or plastic. Metal mesh is recommended because it is usually finer which can prevent smaller insects such as mosquitoes from entering the vent. It is hard to manufacture a fine mesh using plastic.

I recommend PartsExtra Louvered Grille Cover Vent with Fly Screen Mesh (click to buy from Amazon). It has a fly screen mesh that is fine enough to prevent mosquitoes. It is a durable vent designed for outdoor application with its body material made of stainless steel. Besides, its louvered grille is weatherproof which is very important to prevent rainwater from entering the vent which can rust the duct.

On the other hand, you can buy a metal mesh, cut it into shape and put it behind your external vents. Most of the time, it’ll work just fine. However, you may find it hard to install back because it was not designed to have an insect screen. But, if you press harder, it’ll fit too. Just be careful not to cut yourself or damage the steel mesh.

I found a video on YouTube where it demonstrates how to install the steel mesh onto a vent. I thought you may find it useful, so I embedded it.

Are Mosquitoes Attracted to Air Conditioning?

You may have noticed that mosquitoes are hardly seen in air-conditioned rooms because they were resting or hiding due to the cold environment. Once, you turn off the air conditioner, they are slowly back into action.

However, mosquitoes move slowly or not moving at all when the room temperature is at around 75°F (24°C). Thus, using an air conditioner can stop mosquitoes from disturbing you.

Can Bugs Get In Through Central Air Conditioners?

Bugs are bigger than mosquitoes. Thus, if you have more of a bug problem, you may use plastic mesh instead of metal mesh on the fresh air vent to prevent bugs from getting in through central air conditioners into your house.

Mosquitoes can come through the fresh air vent of air conditioners and the exhaust vent of ventilation fans if we don’t put an insect screen behind the vents. All external vents should have an insect screen as it is a basic requirement for preventing insects and bugs’ intrusion.

Nevertheless, we can solve this annoying issue by either install an insect screen ourselves or replace a new vent with a proper insect screen that lasts for many years.