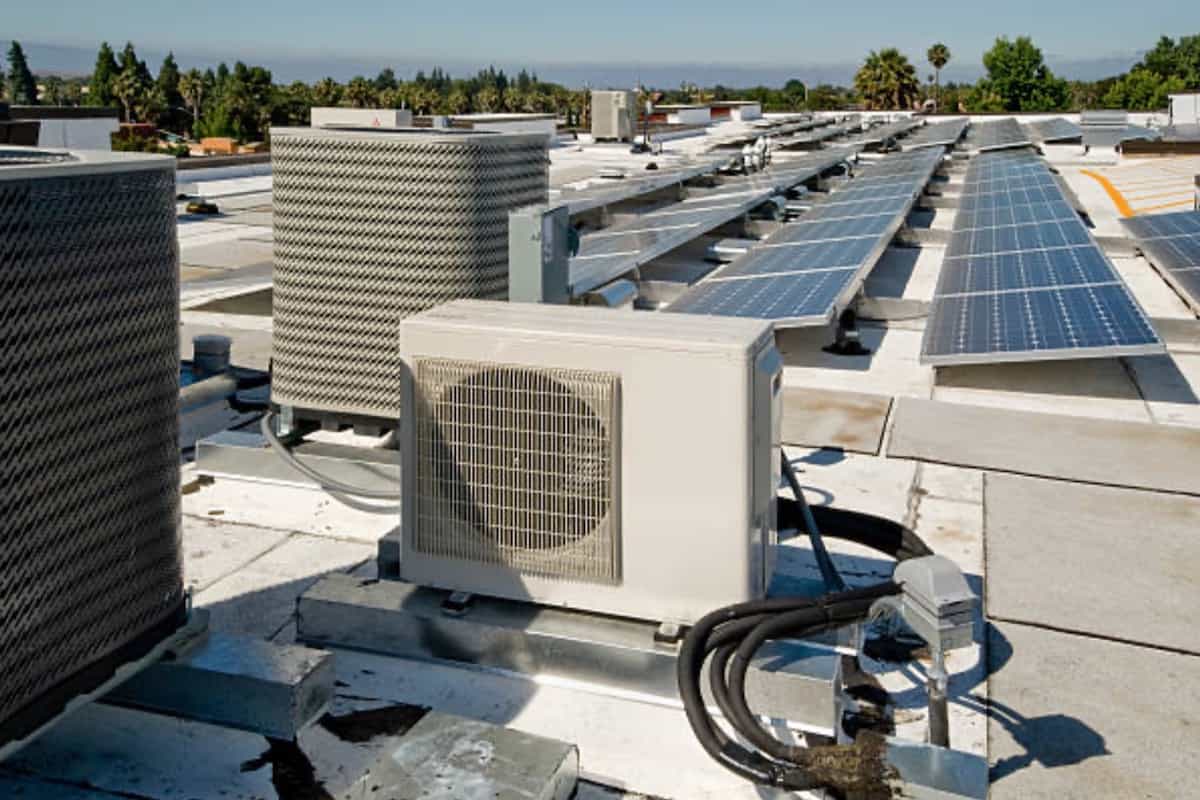 The compressor, inverter drive, fan motors and other components of solar air conditioners are powered by direct-current (DC) instead of alternating-current (AC) that power conventional air conditioners.

Some solar air conditioners don’t have DC-powered components. Instead, they are modified conventional air conditioners that utilize an inverter to convert the DC power from solar panels to AC power for operation.

However, during cloudy days, the DC air conditioner may draw power from the grid due to insufficient power is generated from the solar panels. Besides, some hybrid solar air conditioners may reduce cooling power in order to stay 100% on solar power for as long as possible.

Hybrid solar air conditioners are more practical for commercial buildings because they don’t go offline when there is no solar power. Instead, they simply use the power from the grid just like a normal air conditioner.

With hybrid solar air conditioners, the electricity cost can be reduced significantly because the majority of the power used by the air conditioners is free energy from the solar panels.

As for the batteries, it is depending on how long the DC air conditioners need to run without the power from the solar panels. Nevertheless, it is common to have a 500Ah battery attached to a 9000 BTU pure solar air conditioner.

However, during cloudy or rainy days, the solar panels may not have sufficient power to run the DC air conditioner, let alone charge the battery. In this case, there will be no cooling/heating during the day and even at night.

Previously, people hook a conventional air conditioner (AC powered) to a solar inverter that is connected to a battery and a few solar panels. By doing so, they don’t need to upgrade their air conditioners.

With such a configuration, the return on investment is theoretically better. In addition, the solar system can also provide “free energy” to other appliances in the house which further reduces the overall electricity cost.

Solar air conditioners are generally too expensive for most people. However, the cost is declining. In my opinion, using a few solar panels and several small batteries for a DC air conditioner may not be the ultimate solution for off-grid cooling/heating.

Instead, transforming the entire house into solar-powered with large batteries may be the ultimate solution not just for cooling/heating, but also for other appliances. For instance, Tesla solar panels with powerwall. With the entire house powered by solar, high efficient DC air conditioners will be extremely valuable.

To learn more about HVAC, purchase and download the HVAC Begin (eBook).