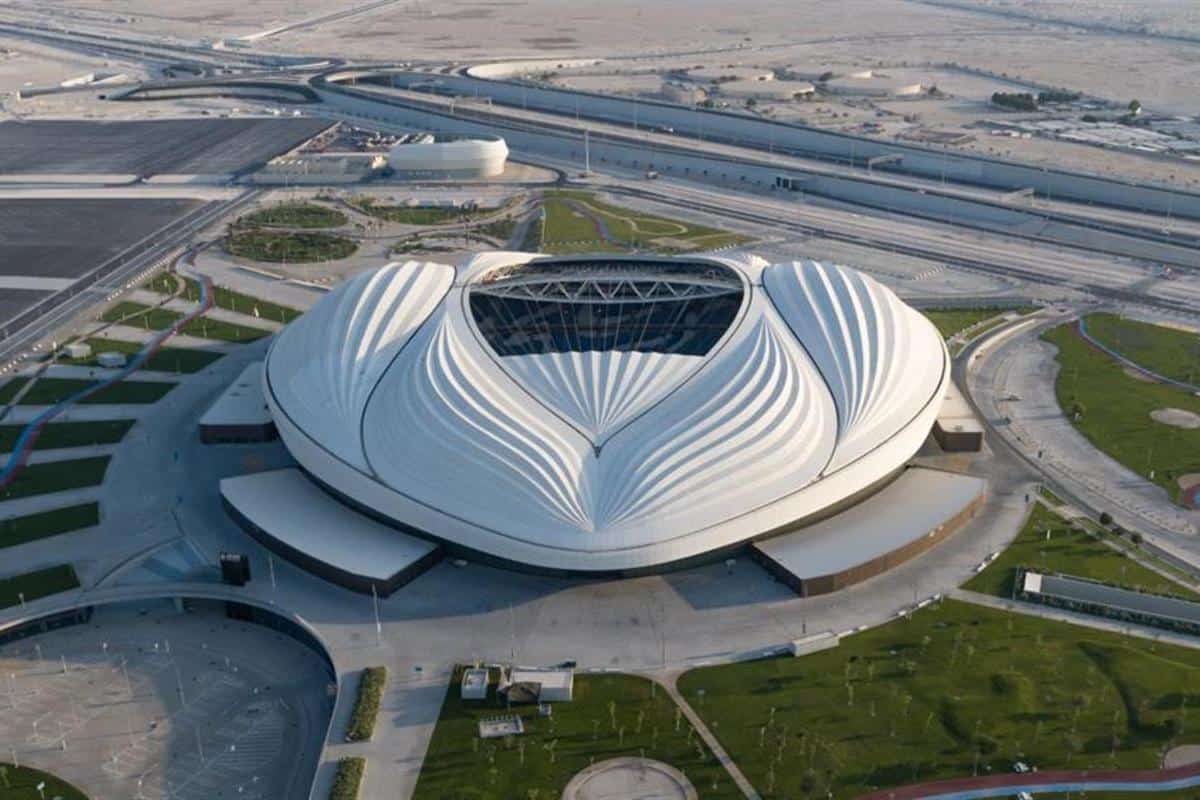 The FIFA world cup 2022 is held in Qatar’s air-conditioned stadiums. The air conditioning system in the eight football stadiums is one of the most discussed topics of the world cup ever since Qatar successfully bid as the hosting country.

All stadiums used for the world cup in Qatar is air conditioned by altering the design of the stadium to block warm air from entering the stadium. Then, spot cooling method is used which only the air about 2 meters above the ground is cooled to reduce energy wastage.

Qatar is located in the middle east, just beside countries like Saudi Arabia, Bahrain and the United Arab Emirates, and places like Abu Dhabi and Dubai where you can find the tallest skyscraper in the world, the Burj Khalifa.

From the geography of Qatar, the weather is expected to be hot all year round.

Still, football players can’t perform at their best and fans can’t fully enjoy the game with such heat.

Hence, the eight open-air football stadiums in Qatar used for the world cup matches were air-conditioned.

Most of the time, air conditioners in commercial buildings such as hotels, office towers and shopping malls take in around 10% outside air (fresh air) and the rest is return air (~90%).

Because the return air is already conditioned (cooled and dehumidified), the air conditioner doesn’t have to work as hard compared to taking in 100% fresh air.

Hence, open-air stadiums where the outside air is constantly coming in are very difficult to air-condition. Not only the power consumption will be very high, but the total cooling capacity needed is also huge. Thus, the total cost (installation + operation) will also be very high.

It doesn’t make any economic sense to air condition an open-air stadium.

Nonetheless, the eight open-air stadiums of Qatar are air-conditioned and the way they did it is brilliant and eye-opening to many HVAC experts.

The technology deployed in the eight stadiums used for the Qatar world cup is not something new to HVAC and air conditioning engineers. However, the approach that Qatar’s cooling team takes is something that many experts may not think of.

The first and perhaps most important challenge to overcome is how to prevent outside hot air from coming into the stadium. This is apparently one of the most critical factors in the success of the air conditioning system in Qatar’s world cup stadiums.

Extensive studies, models and tests were done before the construction of the stadium to ensure that the outside wind does not blow warm air into the stadium while carrying away the cold air produced by the air conditioning system.

With the stadium itself shielding against the outside wind, hot air infiltration is minimized and the stadium is sort of like an enclosed space where air conditioning is now possible.

Stadiums are extremely huge. The Al Janoub Stadium where 7 matches of the 2022 Qatar FIFA world cup are held at has a seating capacity of 44,325.

With the football players running on the field sweating and the excited fans cheering for their favourite team, the heat emitted by the people is enormous.

Thus, the total cooling capacity of the air conditioning system needed for the stadium is unimaginable.

However, since not every corner of the stadium is occupied, spot cooling is deployed to reduce the total cooling capacity as well as energy usage.

Traditionally, the air conditioning system in buildings supplies cold air from the top (ceiling diffuser). As cold air naturally sinks (and hot air rises), the entire volume of the room is cooled.

On the other hand, spot cooling does not cool the entire volume of the room. Instead, cold air is supplied to where cooling is needed, for instance, where people are sitting.

Underneath the seats in the Al Janoub Stadium is a bunch of supply air diffusers. These diffusers are custom-made and they are designed to deliver air in a gentle manner (low velocity).

Meanwhile, large centralized return air grilles are located behind the seat section (or stands). They create a negative pressure region which in turn causes the supply air flows through the occupants and return back to the air conditioning system.

Essentially, the cold air coming out of the vent immediately returns back to the air conditioning system while cooling the occupants.

With spot cooling, the air 2 meters or so above the seats is not cooled. The stadium air conditioning team even joked that if you are tall and you stand up, your head may feel warm while your knee may feel cold.

The football field (or football pitch) is also air-conditioned in the eight Qatar’s world cup stadiums. Cold air is blasted towards the field at an angle to form a cold bubble that gently engulfs the players.

At the side of the football pitch is a row of jet diffusers. In HVAC, jet diffusers are used to deliver cold air at a distance. Jet diffusers have great throw distances which enable them to send air further than any other type of supply air diffusers.

To provide gentle cooling and not disturb the trajectory of the football, cold air is thrown to the center of the football field at about 2 meters in height.

As the cold air reaches the center of the field, it gradually sinks, forming a cold air “bubble” above the football field. Without the disturbance of the outside wind, the “invisible bubble” can cover the entire football field and cool the players effectively.

The type of air conditioning system used in the Al Janoub Stadium is a chilled water system. The chilled water supply temperature is designed at 7°C (44.6°F) and powered by absorption chillers.

Normally, a heat source like waste heat, steam or hot water is used to separate water from lithium bromide as part of the normal operation of absorption chillers.

However, in Qatar’s Al Janoub Stadium, the absorption chillers use hot water that is generated by solar power as the heat source (or the source of energy). The hot water is not produced by any machines or compressors but is heated by the sun (solar or thermal energy).

It makes total sense to use solar power in Qatar as the desert in Qatar can reach a staggering 45°C (113°F) and beyond. Furthermore, Qatar’s daylight in June last up to 13:50 hours as recorded by World Data.

The absorption chillers in the Al Janoub Stadium take hot water from a solar farm, Al Kharsaah located in the desert outside the capital of Qatar, Doha. Other HVAC equipments such as air handling units, cooling towers and chilled water pumps are also electrically powered by the same solar farm.

For more about absorption chillers, see my article How Absorption Chillers Work?

My guess is that the cold storage tank is similar to the glycol ball district cooling thermal energy storage tank that I discussed in one of my previous articles.

2 hours before the event, the stadium turns on the air conditioning system. Immediately, the primary chilled water pumps circulate the chilled water to the cold storage tank to produce 7°C (44.6°F) chilled water and supply it to various air handling units (AHUs).

The AHUs in the Al Janoub Stadium probably work the same as other AHUs.

First, the chilled water goes into the AHU cooling coil. Next, the AHU draws the air within the stadium and passes it through the cooling coil to produce cold air and then distributes it out to the stadium through ductwork and under-seat vents.

Of course, AHUs are normally equipped with high-grade filters. Thus, the cold air recirculating within the stadium is cleaned and purified.

Providing air conditioning in such large and open-air stadiums requires an enormous amount of energy which in turn increases Qatar’s carbon emission and footprint. So, the cooling team did some work to minimize energy usage:

The air conditioning system in the eight Qatar’s world cup stadiums is said to be the future of open-air stadiums and I sort of agree with it. It indeed opens up new possibilities for hot and humid countries to build stadiums that are suitable for outdoor activities.

However, the amount of money invested in these stadiums is inconceivable. Perhaps, this kind of air conditioning system is not new but it is a question of whether the system is worth the investment.

Nevertheless, such an absorption chiller solar water heater combo is worth considering given that it is much more energy efficient than other air conditioning systems.

Mini split dimension is one of the important aspects to consider when buying one. We need to make sure that we have enough wall space to hang the mini split wall unit. So, I compiled all mini split...