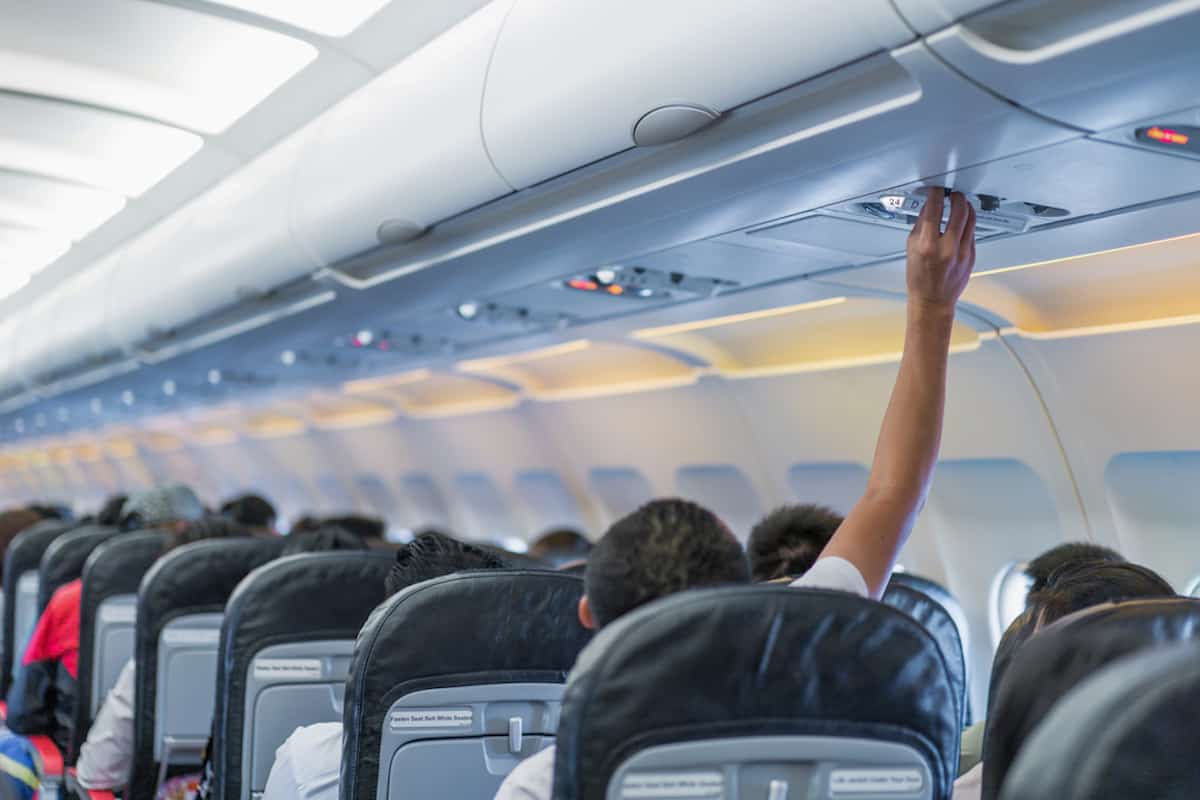 It turns out that air conditioning in aircraft works by taking a small amount of sterilized air from the jet engine and compressing it. Then, the air is cooled by the ambient air via a heat exchanger. Next, the cooled air is expanded by an expansion turbine, causing its temperature to drop further. Finally, water vapor in the cold air is extracted before the cold air is sent to the aircraft cabin.

To understand the air conditioning system in aircraft works, we need to briefly understand a few components of the aircraft:

Such air is known as the bleed air.

So, in order to control the pressure and temperature of the bleed air, the system automatically selects the best port to take in the bleed air from the jet engine (eg: front, middle or back).

In reality, there are multiple ports on the jet engine for bleed air intake (more than 3).

When the aircraft is in flight, the air-to-air heat exchanger takes in the ambient air without the aid of a ventilation fan. Such an air intake method is known as ram air.

In addition, there is a damper or valve to control the amount of ram air intake.

Otherwise, if the aircraft is on the ground, a ventilation fan will force the ambient air through the air-to-air heat exchanger to pre-cool the bleed air.

After that, the pre-cooled bleed air goes into a centrifugal compressor which essentially is a turbine compressor that compresses the air to increase the pressure and temperature of the air.

At this stage, the bleed air has entered the air cycle machine (ACM).

When compared to conventional HVAC, the turbine compressor is the scroll compressor found in the condensing unit of split air conditioners. As you might have already known, the next step is to pass through the condensing coil for heat rejection.

Similarly, the pressurized hot bleed air passes through the turbine compressor and goes into the second heat exchanger (HEX2) where the heat rejection process occurs. Again, the ambient ram air is used cool the bleed air via the second air-to-air heat exchanger.

Once the bleed air goes through the expansion turbine, it becomes very cold. The temperature of the bleed air can drop well below 0°C (32°F). Hence, the water vapor inside the bleed air must be extracted out to prevent ice from forming in the system.

To extract the moisture in the bleed air, a water separator such as a cyclonic separator can be used.

A cyclonic separator spins the bleed air at high velocity and the centrifugal force forces the heavier water vapor to stick onto the surface of the separator. Collectively, the water vapor becomes cold liquid water and it can be sprayed onto the air-to-air heat exchangers to improve heat rejection efficiency.

Now, the bleed air is known as the conditioned air.

Obviously, such a low temperature conditioned air is not suitable to be supplied into the aircraft cabin. Hence, a small amount of pressurized hot air is taken directly from the jet engine and mixed with the conditioned air to bring the temperature up to a suitable level depending on the application (heating or cooling).

Perhaps, that’s the reason why the air is smelly (smells like car exhaust) before the aircraft takes off.

The pressurized hot air taken directly from the jet engine for the mixing process is known as the trim air. The trim air is also known as the unconditioned air.

Once the conditioned air and the unconditioned air are mixed, it becomes the “perfect air” for the aircraft cabin. Perfect air is a term I gave to the final air, not a term used by the aviation industry.

The “perfect air” or mixed condition air has a temperature around 18°C (65°F) to 30°C (85°F). It is then sent throughout the aircraft cabin via ductwork.

The passenger cabin overhead outlet here is not the one that passengers can adjust.

Although the aircraft cabin is relatively smaller than office rooms (for comparison), the supply air velocity is not significantly lower because the supply air needs to sweep the cabin floor and wash out any cold pockets of air in the cabin.

With the circular airflow pattern, passengers won’t feel the cold air blasting on their face while the cold air has enough strength to reach every corner inside the cabin.

For the flight deck or cockpit, the supply airflow is much higher in order to create a positive pressure within the cockpit to prevent smoke and other harmful gases from entering while accounting for the extra solar heat load gain from windows.

After the supply air circulates the aircraft cabin for about 2 to 3 minutes, it enters the return air grilles that are located in the sidewalls near the floor.

Older aircraft don’t really have any return air (recirculation system). They only use the bleed air (100% fresh air). However, with only the bleed air, the humidity level in the aircraft cabin is too low (below RH 5%)

Modern aircraft use 50% bleed air (fresh air) and 50% recirculated air (return air). Since the fresh air at high altitude only has a relative humidity of 5%, introducing 50% return air can increase the relative humidity inside the aircraft cabin to about 10% to 20%.

To maintain a healthy oxygen and carbon dioxide level, the introduction of fresh air into the aircraft cabin is critical. However, too much fresh air (bleed air) will lead to high ozone concentration which is harmful to humans.

In addition, too much bleed air will cause too low of a humidity level in the aircraft cabin which is not preferred.

On the flip side, recirculating the air inside the aircraft cabin may help spread bacteria and viruses, considering everyone is staying in such a small space.

Hence, HEPA filters are included in the recirculation system to remove contamination.

Furthermore, the supply air diffusers and the return air grilles are designed such that the supply air returns back at approximately the same seat thereby reducing the risk of contamination spread from a passenger to other passengers.

For the bleed air (fresh air), filtration of bacteria and viruses is not needed because the high air temperature produced by the jet engine will sterilize the bleed air.

Below is the schematic of the reversed Brayton cycle in aircraft air conditioning:

Essentially, the bleed air from the jet engine enters the turbine compressor. The hot bleed air gets compressed into even hotter air and then, it goes to the air-to-air heat exchanger to be cooled by the ram air.

After that, the cooled but still pressurized air gets expanded by the expansion turbine. As a result, the air becomes low pressure and low temperature which is then can be used for cooling.

Participate in the course survey to help the development of the online course
and get a special offer when the course is launched.