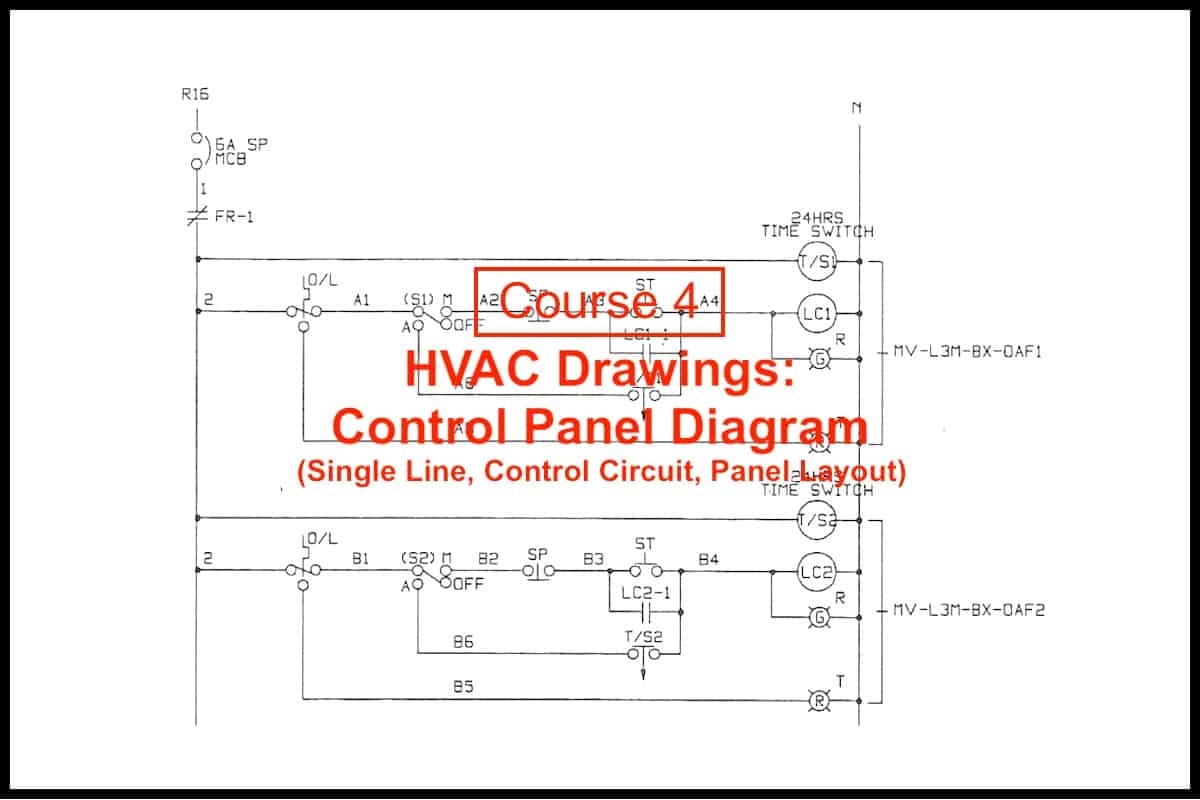 In this course, I have 5 posts on how to read HVAC drawings. These 5 posts are:

In this post, you'll learn the common electrical components used in HVAC control panels. I'll explain each component and briefly on their functions. HVAC panel diagrams may be overwhelming for a junior engineer but if you break it down, they are digestible.

A typical HVAC control panel drawing can break into three parts; a) the single line diagram, b) the control circuit diagram, and c) the panel layout drawing.

The single line diagram shows the cable size, the equipment load and specifications of important electrical components such as MCCBs, the earth leakage protector and starters.

Cable sizes often start with the quantity followed by the number of cores, the cable cross-sectional area, the cable type (fire-rated/PVC/armour/screen), the earth wire and the cable tray/conduit/trunking.

In another word, it means that the equipment uses 6 nos. of single-core 4mm2 cross-sectional area fire-rated cable. It follows by “complete with earth wire” meaning that the earth wire size was not specified.

Usually, this equipment will end up using 6 nos. of 4mm2 for the power cable and 1 no. of 2.5mm2 as the earth wire (earth wire is usually one size smaller than power wire). So, a total of 7 cables.

A star-delta starter is usually used for medium capacity fans. Low capacity fans are using a DOL or direct-online starters. As for large capacity fans like the one in the above drawing, an auto-trans or auto-transformer starters is used.

If you remember from course 2, SFAF is likely an acronym for Smoke Spill Fresh Air Fan. You see, there are many ways to write a tag name for the equipment. However, they are more or less the same.

The following table is the common acronyms used for circuit breakers:

If an overload current passes through a 100A MCB with 25kA is 30,000A, the MCCB will trip but it may be damaged because the overload current is more than the maximum current breaking capacity of the MCCB.

A voltmeter/ammeter combo also have a voltmeter switch and an ammeter switch. In the above drawing, the voltmeter has a maximum range of 500V which is appropriate for 415V equipment. The ammeter reading range should consider the starting and running current of all associated equipment.

Panels should always have earth leakage protection. It can be an ELR (earth leakage relay) or RCCB or ELCB depending on the equipment load and the project specification. Other types of earth leakage protectors may not be drawn the same as the above drawing but they are all located at the same position which is after the main circuit breaker.

Total connected load (TCL) is the total load possible in a panel. It's usually for electrical engineers within a project to calculate their cables, breakers and supplies.

Following is an HVAC outdoor air fan control circuit diagram with the function of each component labeled:

A typical control circuit diagram starts with the control MCB. Then, a fire relay is usually included to trip the entire control and thus, stop all fans and air conditioners in case of a fire. When it comes to individual equipment control circuits, the components are shown in the above drawing.

O/L is an overload relay that cuts off the respective control circuit and therefore, stopping the outdoor air fan when there is too much current flowing through. Auto/off/manual selector switches are very common in HVAC control panels for users to toggle between auto mode and manual mode.

Each component is labeled in the above drawing and I'll skip on individual explanation. Instead, let's take a look at the actual control logic in 4 different scenarios.

In this scenario, the current flowing through the control circuit is normal and hence, the overload relay is not tripping. Then, the selector switch is toggled to the manual position which allows the fan to run when the start button is pushed. The SP or stop button may also be an emergency stop button.

So, the current flows all the way to the LC1 which can be a contactor that energizes to provide power to the outdoor air fan. At the same time, the run indicating lamp will lid.

If there is too much current flowing through the overload relay, it'll trip and stop the operation of the outdoor air fan. At the same time, it'll trigger and lid the trip indicating lamp. With a tripped overload relay, pressing the start button or the selector switch won't have any effect as you can see from the above drawing.

Notice that when the selector switch is toggled to the manual position, there are two methods to start the outdoor air fan. One way is to manually press the start button on the control panel like what we discussed in scenario 1. The other method is to give a signal to close LC4-1.

The signal can be a remote dry contact signal which the signal source could be located in the building control room, far away from the control panel itself. Hence, we called it remote signal or remote start.

How all these electrical components are arranged is heavily dependent on the panel manufacturer. A good panel manufacturer knows how to use the panel space effectively and thus, not wasting on big size panels. However, they more or less are following the same principle.

From the panel layout drawing, we know that this panel is a wall mounted type because of the brackets. If your panel has a “hat” or double-door, you may have a weatherproof floor mounted outdoor panel.

The main incoming breaker is usually located at the top of the panel. A large power panel often has a big MCCB on the side in a separate compartment. Some panels have a built-in thermostat and ventilation fan to dissipate heat through the louvre.

Notice that there is a separate compartment for BMS (building management system) to tap on the signal of the equipment. Usually, such a design can avoid disputes and arguments by clearly splitting the scope of work.