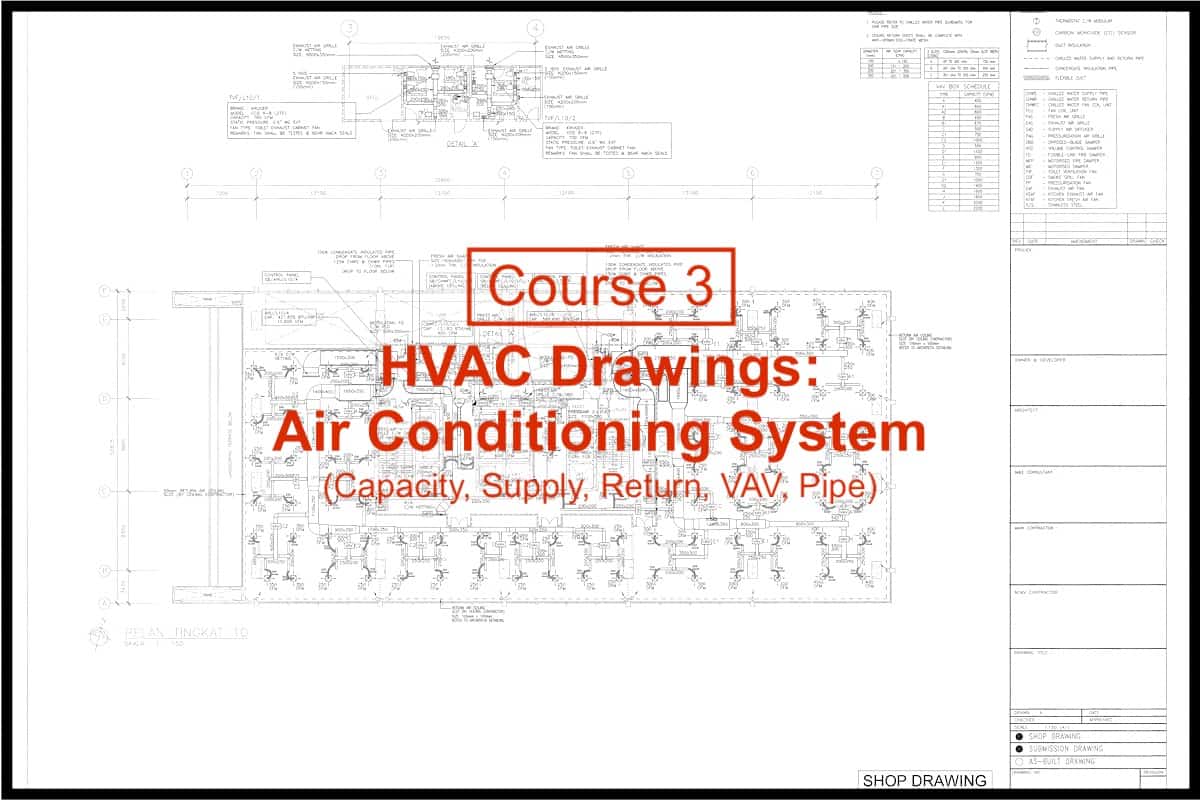 In this course, I have 5 posts on how to read HVAC drawings. These 5 posts are:

I’ll be zooming in to different sections of an office floor ducted air conditioning shop drawing for the explanation. So, you can refer to the below full drawing to navigate around.

Similar to ventilation fans, air conditioning units also have a tag name and a few details written on shop drawings. Details included in the drawing are as follow:

However, if the drawing is too congested, some of the details may be excluded. In the above drawing, the most important tag name, capacity and airflow are included only.

The tag name follows the same principle covered in the previous course about the ventilation system. Every major piece of equipment should have a tag name including control panels.

Common acronyms used for air conditioners are as follow:

The unit of measurement for cooling capacity is mostly btu/hr or British Thermal Unit per Hour. However, some people prefer to use other units of measurements.

Basically, there are only 4 units of measurements for cooling capacity:

Notice that the control panel has an additional “above ceiling” indicating that it should be installed above the ceiling rather than below the ceiling. At the same time, it is assumed that you know to put a ceiling manhole under the control panel for service and maintenance.

Similarly, the duct size, duct reducer and guide vane are being drawn the same way as the ductwork of the ventilation system. However, there are a few new terms used in the air conditioning system.

Flexible ducts are drawn in the shape shown in the above drawing. If a rigid duct is drawn very close to a grille without a flexible duct, it means that NO flexible duct is used but only rigid ducts.

For the air conditioning duct, the duct sizes indicated are excluding the duct insulation. Hence, if you are determining anything related to how much the duct occupied the space, you need to refer and add the insulation thickness on top of the duct size indicated in the drawing unless otherwise specified.

Some of the common acronyms used for grilles are:

Based on the layout of the supply air diffusers and return air grilles in the above drawing, we know that this system is designed to use the entire ceiling as a return air plenum space for the air handling unit.

Dampers used for air conditioning system is the same as the ventilation system. Here, we have a VAV or Variable Air Volume which is a box that controls the amount of supply air to a particular space.

Typically, VAVs required straight duct clearance (about 600mm) in the front and back. As you can see in the above drawing, sufficient space is allowed before putting the VAV.

Tags beside the VAV such as C2, G2 and A2 are just a name given to each type of VAV for us to read better and avoid installing the wrong one since VAVs look more or less the same from the outside.

These indicate that insulations are needed inside the duct. Duct internal insulation is required to reduce the noise transmitted from air conditioners to the office space through the duct.

Air conditioning pipes can be drawn in several forms. The most common one is the dotted line as shown in the above drawing. Lines with circles are often used for condensate pipes. Nevertheless, there is no fixed rule and you can always refer back to the legend to confirm.

Most control panels are drawn as shown in the above drawing. Some people may not color half of the rectangular but they are generally shaped as a rectangular box with a diagonal line. As for thermostats, they always have the word “T” whether is inside a circle or a square.

In the above drawing, each thermostat corresponds to one VAV. Hence, there are many thermostats shown in the drawing. Typically, there is only one thermostat for one air conditioner.

I would suggest everyone to include square-shaped ceiling manholes in their shop drawings where necessary. Many times, people miss out on ceiling manholes. Later, they have arguments due to heavy variation orders from the ceiling contractor. Sometimes, the arguments end up with ceiling manholes get voided, causing a lot of problems for future maintenance.